The first level of the game is a large plain based level and features common enemies like Goombas, Koopa Troopas, Piranha Plants, and Venus Fire Traps. This level is also the level that introduces the Super Leaf which transforms Mario into Raccoon Mario. When the player gains enough momentum at the section with the three Goombas, they might be able to fly up to a platform of clouds filled with coins and a 1-Up Mushroom. The player can fly even further to the right to reach a Warp Pipe which leads to a bonus room with a "3" made out of coins. The Paragoomba and Venus Fire Trap make their first appearance in a Mario series game in this level. If a player exits the pipe, they will reach the goal.

This level takes place in a grassy area with many hills and also some pipes that stick out of the ground, where Note Blocks first appear. Mainly Goombas and Venus Fire Traps inhabit the area. A variation of a Paragoomba that produces Micro-Goombas can be found at the end of the stage. Mario can make use of a P-Switch or a Super Leaf to gain access to a floating Warp Pipe located halfway the level. This will earn the player 20 coins. One of the many Note Blocks in that area also contains a Starman.

By utilizing the second Goomba-hatching pipe in the level, and using Raccoon Mario's tail-gliding to jump from Goomba to Goomba, Mario can rack up an extraordinary number of lives. Between using this trick and collecting the 1-Up above the pipe midway through the level, it is not unreasonable for Mario to complete the level with a total of 30 lives or more.

A plain-based level that resembles World 1-1, where Note Blocks second appear. but features Boomerang Bros.. Two secrets are hidden within the level. The first one is a hidden passage to Coin Heaven, an area over the clouds that is filled with coins and a 1-Up Mushroom. Mario can travel to Coin Heaven via a hidden Note Block in the area with the many Brick Blocks and the red Koopa Troopa. If the Koopa Troopa's shell is kicked to the left, it will break the blocks, so that the Note Block can be revealed.

Another secret in this level is the hidden obtainable Warp Whistle that can send Mario to a Warp Zone. It can be found in a concealed Toad House behind the goal. To reach it, the player has to go to the white block with the red Koopa Troopa on top, stand where the coin is located, and press down on the directional pad. This will cause Mario to slip behind the background and the player can access the Toad House by running behind the black scenery at the end of the level. Enemies cannot hurt Mario if he is behind scenery but he is still vulnerable when he is not.

A wide bottomless pit stretches across this auto-scrolling level. To safely traverse this stage, the player has to make use of floating platforms that fall after Mario steps on them and hovering Brick Blocks. Some of these blocks contain coins and 1-Up Mushrooms, that can be obtained by Raccoon Mario. If the player can manage to collect 44 coins, a White Toad House with a P-Wing will appear (Super Mario Advance 4 version allows the player to earn the P-Wing with fewer coins).

The fortress in the middle of Grass Land is a dangerous place filled with Roto-Discs and Lava which causes Mario to lose a life upon contact. Podoboos emerge from the glowing liquid, so the players should be careful when jumping over a gap. A Fire Flower can be obtained along the way, marking the item's in-level debut in the game (though a Fire Flower could be obtained a little earlier from the first Toad House). The latter half of the level features a spiked ceiling that moves up and down frequently. The ceiling will attempt to crush Mario if he does not pay attention to the movement pattern and make use of the gaps in the ceiling. At the end of the stage, a Koopa called Boom Boom serves as the castle's guardian. He can be defeated by jumping on him three times or shooting several fireballs at him. When Mario jumps on his back while the spikes point upwards, he will get hurt. Boom Boom leaves an orb behind after being defeated which serves as the level's goal.

Another Warp Whistle can be found in this level. Before entering the room with the descending ceiling, if Mario is in his Raccoon Mario form, the players can fly up above the ceiling in front of the door. If they walk all the way to the right and enter an invisible door, they will end up in a secret chamber which hosts the Warp Whistle. Collecting the Warp Whistle will clear the level, but the locked door will stay locked; players have to defeat Boom Boom to destroy the locked door.

This house has three chests with a power up in each one. A Fire Flower, Super Leaf, and a Mushroom.

It is the shape of a playing card with an ace on it. There are three symbols; a mushroom, fire flower, and a Starman. Line them up right into one of the three shapes and you get 1-ups.

A system of underground tunnels serves as the setting of this level. At the beginning, Mario will slide down a ledge to kill the enemies and end up in a pool of water. Piranha Plants, Venus Fire traps and even some Buzzy Beetles inhabit the cave and try to slow down Mario's progress. Another access to Coin Heaven can be found here in form of a concealed Note Block. A Warp Pipe at the end of the level transports Mario to the finish.

There is a different beginning to going to Coin Heaven. Next to the Venus Fire Trap, there is an opening in the tunnel which allows Mario to go in. The Note Block is on the left. After the player goes through Coin Heaven, they will be dropped down from a blue Warp Pipe until reaching the goal.

This level bears some similarities to level 1-4, meaning that a large bottomless pit stretches across the entire level. However, this level is not an auto-scrolling level. The player has again to make progress by using platforms as stepping stones. In the latter half of the level, Mario must ride on a floating platform that follows a set path, dodging Paratroopas along the way. The player must get into the platform with a wire while jumping to reach the goal.

You'll face one Hammer Bro that is standing on a row of blocks. Hit the block he's standing on from below to finish him. You'll be rewarded with an item. Defeating the Wandering Hammer Bros. will result in another trip to the Toad House, which still retains the same three items.

In the King's Palace, Mario will find the transformed Mushroom King, as well as a Toad who begs for Mario's assistance. Mario will then infiltrate Larry Koopa's airship, which serves as the main level. Several Cannons and Bill Blasters are installed along the gangplank, so Mario will have to dodge many Bullet Bills and other projectiles. A gray Warp Pipe at the end of the stage leads to the battle with Larry Koopa.

Larry's only attack is to use the magic wand to shoot rings at the player. The player must dodge the rings and stomp Larry three times (or throw several fireballs at him) in order to defeat him and win the wand back. The king of this world will then change back from a dog (NES version) or a Cobrat (GBA and SNES remake) into his normal self. He thanks the player and gives a letter from the Princess then it's off to the Koopahari Desert.

World 1-Airship
Add a photo to this gallery 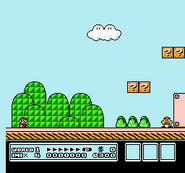 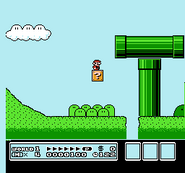 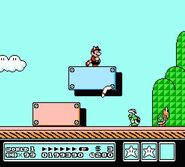 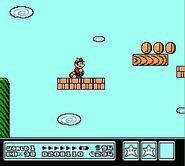 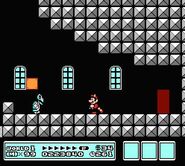 Fortress
Add a photo to this gallery

Attention MarioWiki users!: This article is too small or lacks sufficient information. Whether you are commenting or editing, we would be pleased if you help MarioWiki by expanding it.
Retrieved from "https://mario.fandom.com/wiki/Grass_Land?oldid=297180"
Community content is available under CC-BY-SA unless otherwise noted.