MarioWiki
Register
Don't have an account?
Sign In
Advertisement
in: Stubs, Locations in Super Mario 64, Locations,
and 2 more
English

Goomboss Battle is a level featured only in Super Mario 64 DS. The level itself takes place in a dark forest with many stumps to traverse along. There is also heaps of Toxic Gas which must be avoided, this is apparently the domain of the Goombas.

This location is where Yoshi goes and tries to save Mario from his capture. This level has many pools of poisonous liquid that can end up dealing heavy damage. At the top of the giant stump, is an entrance to the local where Goomboss awaits.

Upon reaching this area, Yoshi and Goomboss enter a deadly battle and after defeating him, Yoshi saves Mario. This allows the player to use Mario throughout the game.

When fighting him as Mario, Luigi, or Wario, Goomboss will also spawn Goombas in front of him. For this battle, you will need to punch one of the Goombas at Goomboss to do damage, with this method the fight is easier.

There are 2 Stars located in this course and they are listed below.

There are 8 Red Coins scattered around this course. You will need all 4 characters unlocked (as well as the ? Blocks activated) to get them all, the locations are listed below.

After all 8 Red Coins have been collected, the Star will appear just south of the stumps where the 8th Red Coin is located.

You will need Mario for this Star. The Star Switch is located east of the course's starting point. Run right and then down (whilst traversing the gray platforms and avoiding the Piranha Plant) and hit the Star Switch there and quickly run for the mesh cage. Preform a series of wall jumps to reach the top ledge where the Star is located. 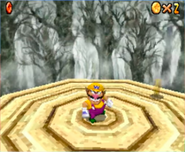 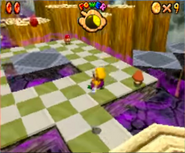 Yoshi and Goomboss meet for battle.

Attention MarioWiki users!: This article is too small or lacks sufficient information. Whether you are commenting or editing, we would be pleased if you help MarioWiki by expanding it.
Deutsch Español Italiano
Community content is available under CC-BY-SA unless otherwise noted.
Advertisement