Goobs are blue ghosts with white eyes and mouth. In the Grand Lobby, there were Goobs disguised into human staffs, they were wearing masks with the Steward. The Goobs show their true form when Luigi enters the Lobby during night. Like Greenies, they sometimes use weapons or clothing to protect themselves, such as mask, shield or sunglasses.

Goob in the Godzilla outfit. 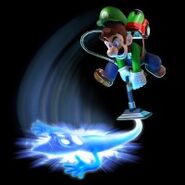 Artwork of a Goob being slammed. 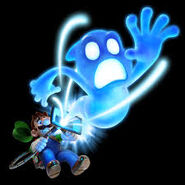 Add a photo to this gallery
Retrieved from "https://mario.fandom.com/wiki/Goob?oldid=282996"
Community content is available under CC-BY-SA unless otherwise noted.