Mario Kart Tour, where he is used if you play Coin Rush.

Giving the user the ability to turn enemies and objects into coins, and attracting coins in Mario Kart Tour
Gold Mario, (or Silver Luigi when used by Luigi), is one of the Mario Bros.' forms which first appeared in New Super Mario Bros. 2. Their move set allows them to throw magnificent fireballs that demolish obstacles and enemies and turns them into coins. The fireballs also make Brick Blocks and Question Blocks release their items. The player loses the power-up after they finish a level or gets hurt. For Super Smash Bros. for Nintendo 3DS, when a player grabs 100 coins in the stage Golden Plains their character will turn Golden: this includes Mario himself.

To promote New Super Mario Bros. 2 in 2012, Nintendo teamed up with Oreo to create an advertisement that featured Gold Mario shooting golden Oreos. 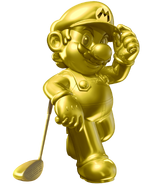 Outfit in Super Mario Odyssey
Add a photo to this gallery

Retrieved from "https://mario.fandom.com/wiki/Gold_Mario?oldid=312349"
Community content is available under CC-BY-SA unless otherwise noted.