Gives out coins.
Gold Block is an item that appears in New Super Mario Bros. 2 as a way into following the game's gold theme.

This item can be gotten once a Brick Block is hit ten times in a certain time limit until turned golden. Some gold bricks are found already in the gold form (without requiring to hit a brick block). Then, it can be worn by Mario and Luigi. Then, coins are obtained in a slow pace. Mario and Luigi will generate coins until they are hit or the block is destroyed after a certain amount of time. The faster Mario/Luigi runs, the faster they get coins.

If the Gold Block is hit with a Koopa shell or if Mario/Luigi already has a gold brick, then it throws coins up until it disappears after a period of time.

This is relatively similar to the wearable Question Blocks from Super Mario 3D Land. Also, their face can be seen on the block once worn. The face looks 8-Bit. 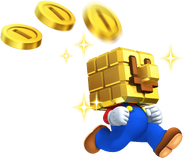