Once grabbed, the level is finished.
The Goal Pole, also called the Flagpole, is the object at the end of a traditional side-scrolling Mario game. They first appeared in Super Mario Bros., and have reappeared in numerous titles since. They haven't appeared in every main title, though. In the Super Mario series, flagpoles are replaced with stars, with the exception of Super Mario 3D Land, which is the first 3D Super Mario game to have flagpoles instead of stars.

If the player gets a 1, 3 or 6 on the timer, you will get a certain amount of fireworks depending on the number.

If the last two digits on the timer match, a Toad will give the player a power-up depending on what the numbers are

You don't really get anything from just sliding down the flagpole in the first 10 worlds other then just a Golden Flag. However, getting a gold flag in the game will unlock the final world, and Champion's Road. 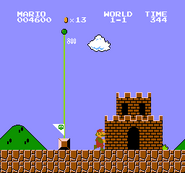