Glydon is a yellow bipedal flying lizard. He's taller than Mario and features a long tail, two hands with three fingers and a thumb each and two rather short legs which are typically kept significantly bent and almost perpendicular to his tail, resulting in a very peculiar walking gait.

He also has two giant membranes on his sides that he uses for gliding and are reddish-orange in color, with various visible veinings on the inside, while the outside is red into orange on the tip, featuring irregular yellow stripes.

He wears small round red spectales on the tip of his muzzle, reddish brown shoes with beige outsoles, similar to those worn by Yoshis, and a bandana with alternating yellow and red stripes that end with yellow and red triangles and an outline formed by a green strip followed by a white strip.

He states that he's travelling to various Kingdoms to glide from the highest places, while the World atlas as well as his bandana having similar motifs as the ones found on the ponchos of Tostarenans indicate that his homeland is in the Sand Kingdom.

Mario can take control of Glydon to glide and dive, however, when captured, Glydon is unable to swim and simply disappears as soon as he touches water. Some Power Moons are obtained from other non-playable characters when Mario successfully reaches distant places by gliding with Glydon.

Glydon is derived from Glide and don, a dinosaur. 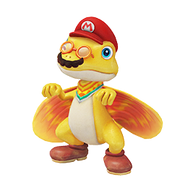