MarioWiki
Register
Don't have an account?
Sign In
Advertisement
in: Locations, Locations in Paper Mario: The Thousand-Year Door, Buildings
English

When Mario, Goombella, Koops, and Flurrie first arrive at the Glitz Pit, they see the champion, Rawk Hawk in action, and can see that he is wearing a Crystal Star on his Championship Belt. Mario and the gang decide they should join the Glitz Pit's fighters and work their way up through the ranks to get the Champ's Belt, and then get the Crystal Star. The group starts out in the Minor League, where they meet King K, Bandy Andy, Master Crash, and Cleftor.

The gang eventually gets an addition to their team, a newly hatched Baby Yoshi, who is the only one who can defeat the tough fighters, the Armored Harriers. King K and Bandy Andy suddenly disappear and are found later stuffed under a giant yellow block, struggling to stay alive. The heroes advance to the Majors and eventually are about to fight Rawk Hawk.

The group gets locked in their locker room, as Rawk Hawk planned, so he could win by default. The gang finds a way to get out, and challenge Rawk Hawk, and defeat him, becoming the champ. The heroes later find out that Grubba, who owns the Pit is the one who made Bandy and King K "disappear", and sucks the life out of them for ever-lasting youth. The heroes fight Grubba (who has turned into Macho Grubba), defeats him, and getting the Crystal Star. Prince Mush, the original Champ is released from Grubba's machine and is reunited with his sister, Jolene. The heroes claim the Crystal Star and are on their way.

During the Glitz Pit, Mario and friends must battle through many competitors. These characters have unique team names that involve certain enemies fought during the journey. Note that this list shows the ranks after Mario, named The Great Gonzales, becomes champion or Ranked 1. These teams consist of:

In the corridor of the Glitz Pit, it can be found in a blue box near the right entrance.

Mario and the green newborn Mini-Yoshi

In the major-league room, it can be found in the northwest corner. 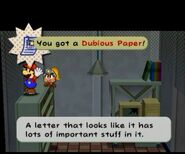 In the minor league locker room at the Glitz Pit, accessible by breaking the large block with the Super Hammer and then fluttering across the gap with Mini-Yoshi.

In the first-floor storeroom, it can be found among the boxes in the northeast corner with Flurrie's help.

In the Glitz Pit storage room, on top of a box that can only be accessed with the help of Koops or Mini-Yoshi

In the second-floor lobby, it can be found behind the leftmost poster during one of X's missions.