"Even though it's half sunken, the once-proud flagship of Kaptain K. Rool's fleet still serves as the first line of defense against any Kong rescue party."
― Nintendo Player's Guide, Donkey Kong Country 2, Page 20

In Donkey Kong Country 2: Diddy's Kong Quest, Gangplank Galleon serves as the first world in the game. It is King K. Rool's pirate ship from Donkey Kong Country, but expanded to act as a pirate ship. Here, there are Neeks, Klomps, Kaboings, etc. to try to stop Diddy and Dixie as they are on their quest to free Donkey from K. Rool. K. Rool also has his own cabin in this world at the start of Pirate Panic. Though, he is never seen in it. At the end of this world, Krow is seen to be the boss and is fought with eggs needed to be thrown at him in order for him to be defeated so the monkeys can venture on to Crocodile Cauldron.

At the end of the game, the Lost World had energy build-up when Kaptain K. Rool fell into the power source of the area (and the island in general). This caused Crocodile Isle to sink, with K. Rool and the Kremling Krew escaping into Gangplank Galleon to flee the isle.

In the Game Boy Advance version, Gangplank Galleon has been relocated to the right side of Crocodile Isle instead of the left in the original version.

After Crocodile Isle resurrected from the water, Gangplank Galleon too was resurrected. Enemies including Neeks, Klomps, etc. scavenged the area once more with all of the same levels appearing, including Krow reprising as the boss in the area atop the mast with his nest and eggs. When he is defeated once more, Diddy and Dixie may venture onwards to Krem Cauldron, the merged area for Crocodile Cauldron and Krem Quay.

At the end of the game, K. Rool's bulk once again causes energy build-up in the power source of the island (more specifically, the Lost World). As the island sunk, the Kremling Krew escaped into Gangplank Galleon and fled the island when the island sunk once more. 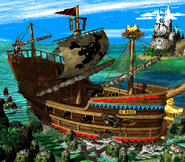 Donkey Kong Land 2
Add a photo to this gallery
Retrieved from "https://mario.fandom.com/wiki/Gangplank_Galleon_(Donkey_Kong_Country_2:_Diddy%27s_Kong_Quest)?oldid=278489"
Community content is available under CC-BY-SA unless otherwise noted.