Game Over is a term used to describe whenever Mario or any other character loses all of their lives and therefore the game. It does not affect gameplay and is cosmetic. A Game Over is first seen in Donkey Kong when Mario loses all of his lives. Over the course of the series, Game Overs are usually described in different ways. So far, Game Overs aren't present in the Mario sports games most notably Mario Kart.

The first appearance of a Game Over in a Mario game. Whenever Mario loses all of his lives, the screen freezes as the words "Game Over" show up in the middle of the screen. If the player has a high enough score, they can add their initials on the next screen.

In Super Mario Bros., when Mario or Luigi lose all of their lives, the next screen is black with the words "Game Over" is shown and the trademark "Game Over theme" is played.

In Super Mario Bros. 2, the Game Over screen is pretty similar to the main "Press Start" screen though now it says Game Over.

In Super Mario Bros. 3, the Game Over screen shows Mario or Luigi with a halo while the screen itself is faded. The player is then given a choice continue or quit the game.

The Game Over screen is pretty similar to the one from Super Mario Bros. except the texting is more closer together and is yellow in color.

The Game Over screen in this game shows a fatigue Mario while the background is red with the words "Game Over" everywhere.

In Paper Mario, the Game Over screen shows a knocked-out Mario laying on the ground with the light shining on him. The words "Game Over" drop down and then the screen fades back to the title screen.

In Paper Mario: The Thousand-Year Door, the Game Over screen is pretty similar to Paper Mario except it's on a stage. The curtains then close and open back up to the title screen.

In Super Paper Mario, Game Overs are much more explained. Whenever a character gets a Game Over, they are sent to The Underwhere where they will be judged by Queen Jaydes. A Game Over occurs when the player loses all lives. It also occurs in different ways:

The Game Over screen appears when Mario loses his last life and the "Too Bad!" or "Miss!" (in the Japanese version of the game) sign changes into the "Game Over" sign. The words "Game Over" are colored red. In the deluxe version for the 3DS (if you're playing as Luigi), the words are green instead of red.

The "Game Over" screens appears after the player loses four lives in different stages.

If the player comes in 5th-8th place, he/she is required to retry to move on to the next race. The player has 4 tries. If he/she loses enough times, they will get a game over, meaning that they cannot retry. It is one of two Mario Kart games to have a game over.

Similar to Super Mario Kart, the player has 4 tries. Getting 5th-8th four times will get them a game over. This is the last Mario Kart game to have a game over.

When Luigi is defeated, he collapses on the floor. The camera darkens and focuses on his corpse. Oddly, the words "Good Night!" appear, replacing the usual "Game Over". Their appearance is also ironic, as Luigi seems to be having more of a BAD night. 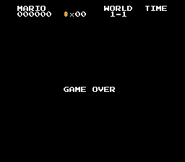 Super Mario Galaxy
Add a photo to this gallery
Retrieved from "https://mario.fandom.com/wiki/Game_Over?oldid=293020"
Community content is available under CC-BY-SA unless otherwise noted.