MarioWiki
Register
Don't have an account?
Sign In
Advertisement
in: Characters, Pages with section stubs, Characters in Mario Kart Tour,
and 13 more
English

Mario Kart Wii marks Funky Kong's first appearance in a Mario Kart game. Funky Kong is a large type character and must be unlocked by unlocking four Expert Staff Ghost data in Time Trials. He has a speed bonus of 4, which makes him a very popular character to use in time trials with fast heavy bikes. He is considered as the best character to pick among fans in combination with the Flame Runner as he has the greatest speed stat when in a wheelie.

In the first game, without Funky mode, Funky Kong was the owner of the shop and sold useful items to the Kongs, such as balloons. In the Funky mode Funky Kong is an easy pick good for beginners or players who want to relax while playing, as he is the most versatile and easiest choice to play the game, as he can double jump, hover, and has 5 hearts. Along with him he carries his trusty surfboard.

Funky Kong appears as a new playable character for the Jungle Tour update.

Funky Kong is an unlockable playable team player in Mario Super Sluggers, where he has good batting and decent fielding skills, while lacking in pitching and running skills. He is the only Kong in the game who bats with his right hand, while fielding with his left hand. He has good chemistry with all the Kongs and bad chemistry with the Kremlings. He is unlocked after he joins the player in Challenge Mode. 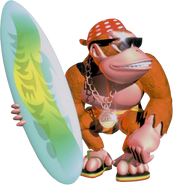 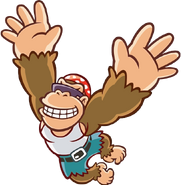 Funky Kong with his kart in Mario Kart Wii