Slipping into the player.

Picked up and thrown at another enemy, have an item thrown at it.

Flurry is a snowman-like enemy in Yume Kōjō: Doki Doki Panic and Super Mario Bros. 2. This foe resides in World 4. Flurry is also a minion of Wart who leads the 8-bits.

Flurry attacks by attempting to skid into the player. As Flurry has poor maneuvering skills, Flurry easily can fall down into a pit or a crevice and become defeated. Flurry, like many enemies, can be defeated by having an item or an enemy thrown at it.

Flurry makes a cameo appearance in Super Princess Peach in the background of the sixth world entitled Gleam Glacier.

Flurries also appear in The Super Mario Bros. Super Show! but only in the episode Koopa Klaus. They were summoned by Koopa Klaus where they attempted to slow down Mario's group using ice blocks. However, they were easily knocked away when Mario, Luigi, and Toad got on an ice block themselves.

Flurry's name is derived from the word "flurry," which defines a brief period of snowfall. 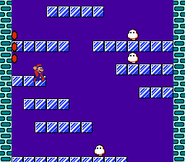 Flurries as seen in The Super Mario Bros. Super Show!.
Add a photo to this gallery
Retrieved from "https://mario.fandom.com/wiki/Flurry?oldid=289732"
Community content is available under CC-BY-SA unless otherwise noted.