Flame Flyer is a heavyweight kart from Mario Kart Wii. It later appears in Mario Kart Tour as a Super rarity kart and can be obtained through ruby pulls and purchasing from the item shop. Unlike in Mario Kart Wii, the Flame Flyer can be used by any character, rather than being only restricted to heavyweights, and only uses Bowser's color scheme.

The Flame Flyer appears to be based on a muscle car (most likely the 1970 Plymoth Barracuda) with three exhaust pipes sticking out on both sides of the vehicle and a supercharger engine sticking out of the hood. It also has flame accents.

Like all of the other karts, this vehicle has its emblem on the side of the car, depending on who is using it. It also has high speed advantages. However it has the worst acceleration in the game.

The Flame Flyer's bike counterpart is the Flame Runner. 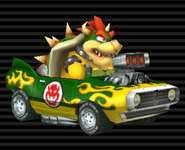 Bowser in his Flame Flyer
Add a photo to this gallery

Retrieved from "https://mario.fandom.com/wiki/Flame_Flyer?oldid=264984"
Community content is available under CC-BY-SA unless otherwise noted.