Gives the player the ability to shoot Fireballs
Fire Mario is one of Mario's many forms. Mario can use this form after picking up a Fire Flower. The form was first introduced in Super Mario Bros. and has since appeared in many other Mario titles.

Super Mario Bros. and other platformers

In this form, the user can throw fireballs at enemies. This form is marked by Mario's shirt and hat becoming mostly white with added red and his suspenders becoming red, instead of a mostly red shirt with added white and blue suspenders. It's the same for Luigi in Super Mario Bros., but he is white and green instead of white and red in later games.

In the sidescrolling games, when Mario becomes Fire Mario, he stays in that form until he gets damaged, when he will revert to Mario or Super Mario, depending on the game. He can throw fireballs at enemies, which is activated with the run button. Also, depending on the game, the enemies hit with fireballs may leave behind coins such as New Super Mario Bros DS and the Wii version.

In Super Mario Land 2: 6 Golden Coins during the final boss battle, Wario would pick up a Fire Flower and become Fire Wario; this was the only time Wario ever turned into Fire Wario., and is one of the few forms to appear in more than one game.

In Mario Kart: Double Dash!!, a special item is based on Fire Mario. It is the Fireball, which can only be used by Mario and Luigi.

In Super Mario Galaxy and its sequel, after finding a Fire Flower, Mario becomes Fire Mario for a short time. The fireballs in this game can hurt enemies, but also light Zelda like torches. Mario can use his fireballs by using his Star Spin. 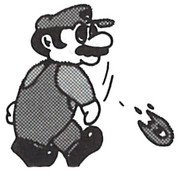 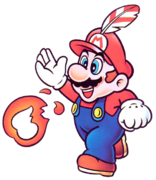 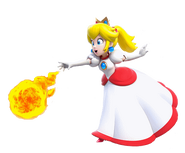 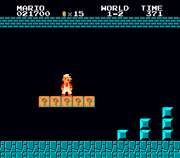 Fire Mario in The Adventures of Super Mario Bros. 3