Super Mario 3D World + Bowser's Fury (2021)
Fire Bars (also spelled as Fire-Bars or Firebars and sometimes known as Podoboo Cogs) are a type of obstacle that has a bar of fire that emits from a block. The bar then rotates around the block and will harm Mario if touched. Firebars can come in many different sizes and can have many fireballs attached to the block usually ranging from 4-6 however in some cases, they can come in higher quantities such as 14. In the 3D Games, Firebars are commonly seen spinning along the ground and many need to be jumped over. If Mario is under the effects of an invincibility Power-Up such as a Starman, he will be invincible to the Firebars and can phase right through them.

Firebars have also appeared in various different spinoffs such as the Mario Kart series and the Paper Mario series. Over the years, similar obstacles have also been introduced such as the Roto-disc and the Ball 'n' Chain which both behave almost identically to the Firebar.

The Firebars always appear in the Castle levels of this game. There are usually short ones and longer ones and Firebars mostly appear near other hazards such as bottomless pits and near enemies such as Podoboos. Mario cannot defeat them by any means and must avoid them.

Firebars return in Super Mario Bros.: The Lost Levels once again found in the Castles and retaining their role from the previous game however there are some Firebars that have 14 fireballs attached to them instead of the usual 4-6.

Firebars don't appear in Super Mario Bros. 3 however a similar obstacle called the Roto-disc appears which acts similarly to a Firebar.

Firebars (under the name Fire Arms) reappear in Super Mario 64 and Super Mario 64 DS. Firebars are only seen in Lethal Lava Land in these game. Their purpose is exactly the same as in Super Mario Bros. except they spin around in circles on the ground. They are commonly found on the various wheels in the course and burn you upon contact. In some cases, there can be two bars of fire on one rod. Firebars can be found around Lethal Lava Land as well as inside the Volcano. The Firebars have been made less common in these games in favor of the Flamethrower.

Their role in Super Mario 64 DS is essentially the same however the Firebar inside the Volcano has been removed. Being under the effects of the Power Flower as Wario (Metal) or Luigi (Invisible) will make you immune to the Firebars.

Firebars (under the name Podoboo Cogs) appear in Super Princess Peach. In this game, they appear as a hazard found in Bowser's Villa. Their behavior is the same as it is in past games however they have more of a red glow to them, they also have less fireballs on them consisting of usually 3-4 as the norm. Once again, being hit will cause damage.

Firebars are also seen in the minigame Toad Tote as an additional obstacle for Toad to avoid. Latter levels of the Minigame also have Purple Firebars.

Firebars (referred to as Podoboo Cogs) appear again in New Super Mario Bros. In this game, they behave as they did previously and do damage upon contact. They can commonly be found in Towers and Castles such as World 8-Fortress 2. They cannot be destroyed in this game. Firebars can also be seen in World 6-4 and Bowser's Castle, they can also be seen on both the ceilings and floors.

Firebars (under the name Fire Arms) appear again in Super Mario Galaxy. In this game, they behave as they did in the previous 3D games but this time, they can also spin in the same fashion as the 2D games. They are commonly found in various Bowser Galaxies such as Bowser's Star Reactor and Bowser's Galaxy Reactor. They also make an appearance as a latter obstacle in the Sling Pod Galaxy and the Toy Time Galaxy. Firebars will burn Mario upon contact.

Firebars (under the name Fire Cogs) appear in New Super Mario Bros. Wii. In this game, they only appear in two levels of World 8, World 8-Tower and World 8-Bowser's Castle. In this game, like in Super Princess Peach, they are noticeably more red in this game. Firebars once again cannot be destroyed in this game. Firebars in this game commonly guard Star Coins requiring players to maneuver around them when going in to grab the Star Coin. Three longer Firebars are also seen in a secret room in 8-Tower. In Bowser's Castle, Firebars can be seen throughout the fire corridor of the Castle alongside many Podoboos.

Firebars (under the name Fire Arms like it's predecessor) appear in Super Mario Galaxy 2. In this game, they are found in several Galaxies (mostly Bowser and Bowser Jr. Galaxies) such as Bowser Jr.'s Fiery Flotilla, Bowser's Gravity Gauntlet, and Bowser's Galaxy Generator. Firebars also appear in the Slipsand Galaxy in a secret room and three are also attached to Bowser Jr.'s Boomsday Machine in Bowser Jr.'s Boom Bunker. Firebars are completely invincible and can burn Mario upon contact just as before.

Firebars (referred to as Fire Traps in this game) appear in Super Mario 3D Land once again behaving as they did in past 3D games (spinning along the ground (sometimes in sets of two)) hoping to scorch Mario (or Luigi). They commonly appear in the Castle levels and are slightly less common in this game.

Firebars (referred to as Podoboo Chains) appear in New Super Mario Bros. 2. In this game, they are slightly less common mainly being found in Volcanoes, Fortresses, and Castles. They behave as they did in past games and notably appear in World 4-Castle and World Star-7.

Firebars (under the name Fire Bar (which would be retained in later installments of the series)) also appear in New Super Mario Bros. U, New Super Luigi U, and New Super Mario Bros. U Deluxe commonly appearing in various levels such as Slide Lift Tower and Fire Bar Cliffs. They behave as they did in previous games regaining their orange color but there are also some Fire Bars which can spin much faster additionally, there are also larger Fire Bars called Huge Fire Bars. In New Super Luigi U, Fire Bars are very common in the level Fire Bar Sprint. Nabbit is immune to the Fire Bars and can run right through them without taking damage. Fire Bars are commonly found in Fortresses, Castles, and Mountains.

Fire Bars return in Super Mario 3D World and Super Mario 3D World + Bowser's Fury. In these games, they are slightly smaller than in previous games and can be seen spinning around ? Blocks. Fire Bars can commonly be found in Castles and lava-themed levels such as Fort Fire Bros. Once again, touching a Fire Bar will cause damage and they are once again completely invincible.

Fire Bars reappear in Super Mario Maker as well as it's two sequels as placeable enemies. Fire Bars can be placed in any style and any theme, even underwater. Additionally, you can also customize the length of a Fire Bar making it 1-15 rods long. Fire Bars are once again completely invincible additionally, in the New Super Mario Bros. U style, Fire Bars are much smaller than they were in the actual game most likely to be consistent with the other themes.

Firebars appear only in Koopa Bros. Fortress and Mt. Lavalava. This is the first game where Firebars can be defeated and Mario can only defeat them by jumping over them many times. Note that the Firebars spin faster and faster after each jump and after the last jump, they burst apart into many coins.

Firebars only appear in the Palace of Shadow in this game for Mario. Mario can jump over them to avoid them. They also appear in the Castle level of Bowser's last level where he must avoid them. Due to his large size, it can be pretty hard to avoid them without taking damage. Bowser can destroy the Firebars by burning the block they're attached to.

Firebars only appear in Yold Ruins and The Crash. Mario can flip into 3-D to avoid them. Touching a Firebar will cause damage.

A Fire Bar appears in Mario & Luigi: Paper Jam in the minigame, Trio Whirligig in the Arcade as obstacles. Their size can range from 2-7 fireballs touching a Fire Bar will take off a hit point and touching three will cause the game to end.

Firebars (under the name Fire Rods in the USA version and Fire Sticks in other regions) appear in Mario vs. Donkey Kong 2: March of the Minis. In this game, they are commonly found in various levels of Lava Dome alongside Jetpack Guys and Podoboos. Touching a Firebar will instantly burn a Mini Mario so time their movements to make it by safely. Firebars can be placed in the Construction Zone in the Lava Dome Kit as well as Special Kit 2 and Special Kit 3.

Firebars (under the name Podoboo Cogs) appear in Yoshi's Island DS as a common obstacle found late in the game, a Firebar can consist of 1-3 rods and they are commonly found in various levels of World 5 such as Find the Number Ball!, Superhard Acrobatics, and At Last, Bowser's Castle. Firebars retain their traditional behavior from the 2D Platformers in this game and are completely invincible. Some Firebars are also capable of spinning in thin air without a block.

In most Mario Kart games, Firebars are referred to as Podoboo Cogs and commonly appear as three spinning chains.

Podoboo Cogs appear in Wario Stadium in Mario Kart DS. In this game, they appear during various sections of the stadium as an additional obstacle to avoid. The Podoboo Cogs have three chains coming off of the eyed central cog. Once again, they can spin you out upon contact.

Podoboo Cogs reappear in Bowser's Castle of Mario Kart Wii. Here, they appear on the split route past the Mechanical Bowser, they spin slowly and once again touching one will cause you to spin out, a larger Podoboo Cog also appears at the Castle's exit. Podoboo Cogs also return in Waluigi Stadium however, the vertical Dash Panels make avoiding them heaps easier. The Podoboo Cogs were also part of a Knex set based on Mario Kart Wii.

Podoboo Cogs return in Mario Kart 8 and Mario Kart 8 Deluxe. In these games, they are seen in Bowser's Castle and the games' remake of Wario Stadium where several new ones have been added to the course's new anti-gravity section where it also shown that they can spin through the mesh tracks. . They behave as they did in past games and can once again spin out racers however, their fiery aesthetic sticks out more.

Super Smash Bros. for Wii U

Introduced as a new item as a sword. The more the player uses it on an opponent, the smaller the firebar gets.

The players trying desperately to avoid the Fire Bars Bowser has set out at them. 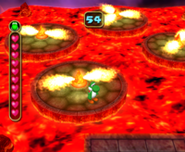 Firebars as seen in Mario Party 4. 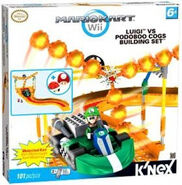 A Firebar from Wario: Master of Disguise.