Used to finish off giant bosses.

Star Drive
Finishing Bros. is a special technique that is used in Mario & Luigi: Dream Team. It can only be used at the end of giant boss fights.

Once a giant boss is about to be defeated, Prince Dreambert will come out and tell Dreamy Luigi and Mario that the boss is in condition to be finished off. With the Finishing Bros., Dreamy Luigi jumps up high and grabs a large star. Mario then gets on the star and Dreamy Luigi tosses it down toward the weakened boss. The player must then use the Nintendo 3DS' gyroscope function to piolet Mario into the boss completely finishing it off.

Star Dive is an upgraded version of Finishing Bros. It is only used in the final giant fight with Dreamy Bowser. Dreamy Bowser actually survives the Finishing Bros. because Kamek uses his magic to make Bowser even stronger and bigger. After Dreamy Luigi knocks Dreamy Bowser into the lava, Prince Dreambert recommends finishing him off with an even stronger move: Star Dive. This time, Dreamy Luigi jumps even higher and grabs an extremely large star. Mario then gets on the star and heads for Dreamy Bowser. However, he will be firing fireballs which must be avoided. The impact is strong enough to defeat him. 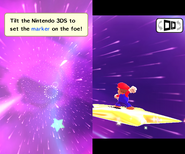 Mario flying toward the boss with Finishing Bros.
Community content is available under CC-BY-SA unless otherwise noted.
Advertisement