A Fighter Fly (also spelled Fighterfly, also referred to as a bee) is a hopping insect that first appeared in the sewers of the original Mario Bros. arcade game.

They wear blue masks around their eyes and do not have much of a good speed. Instead of walking, they bounce around for moving one place to another. In Mario Bros., they make what is thought to be a "ringing" sound before one of them enters the stage.

Fighter Flies are one of the myriad of pests that appear from the pipes to attack Mario and Luigi. They debut in the sixth phase. After emerging, a Fighter Fly will hop across the platform, which means the player has to time their jumps perfectly to strike one.

In early versions of Mario Bros., the designs for these enemies feature large toothy scowls and shiny eyes. However, their design was reworked for the multiplayer mode in the Super Mario All-Stars remake of Super Mario Bros. 3. In this game, they have large, white eyes with black pupils, while their scowls have been replaced with small closed mouths. Their heads are a light orange color, and they have noses. Their design was further developed in many iterations of the game for Game Boy Advance games. This includes additional colors and speeds depending on how many times they have been flipped over.

Fighter Flies also make an appearance in Luigi Bros.. Like other enemies, they retain their behavior from Mario Bros., which Luigi Bros. is based off of.

They also appear in NES Remix, serving as enemies and level objectives for some of the challenges and remixes that are based on Mario Bros..

Fighter Flies are also common enemies in the Stardust Fields Beanbean Side location in the game Mario & Luigi: Superstar Saga and Mario & Luigi: Superstar Saga + Bowser's Minions. They have 6 HP[note 1] in Bowser's Minions, but 5 HP in Superstar Saga. They attack Mario and Luigi very slowly. Also in that game, not only are there Fighter Flies but there are similar enemies called Super Flies. These Flies have a better speed than the Fighter Fly and attack at a higher movement.

Super Smash Bros. for Wii U 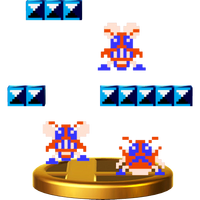 An enemy from the original Mario Bros. Just as the name implies, they are flies that gracefully move across the stage. They jump to move around, so hit them from below when they land. Unlike other enemies, these pests get faster after recovering from being flipped, rather than when only one is left. Be careful!

These pests come from the original Mario Bros. The name might make them sound tough, but these guys are actually kind of elegant and graceful. It's best to wait until they're on solid ground, then bop 'em from underneath to flip them over. If they get back up, though, watch out - they'll start gracefully leaping around a bit faster.

Retrieved from "https://mario.fandom.com/wiki/Fighter_Fly?oldid=276548"
Community content is available under CC-BY-SA unless otherwise noted.