View source
watch 02:17
New Pokemon Games - The Loop
Do you like this video?
Play Sound

Evil
Fiery Gobblegut is a boss in Super Mario Galaxy 2. He is almost identical to Gobblegut, but is covered with flames and can shoot out fireballs and whenever he digs, he leaves lava puddles.

Fiery Gobblegut is found in the Battle Belt Galaxy, but to get to him, Mario has to feed a Hungry Luma twenty coins who is located on the icy planet. He is defeated the same way regular Gobblegut is, except that when he brushes the planet's surface with his chin, he creates lava puddles. If Mario touches any part of Fiery Gobblegut other than a bellyache bulge, Mario will be burned and take damage. He occasionally shoots fireballs too, which create lava puddles that disappear after a short time. 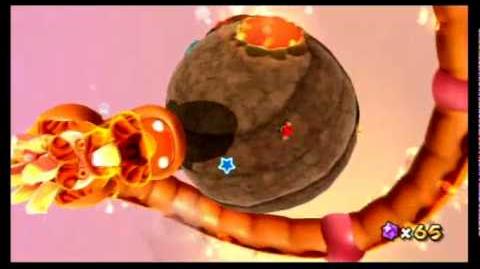