Not to be confused with Jawful.

Fawful is a rather eccentric and excitable villain, famous in the Mario & Luigi RPG series for his humorous one-liners (which hint at him losing his sanity). His first appearance was in Mario & Luigi: Superstar Saga. Fawful is fought twice in the game, once in the beginning, and once before Bowletta, the final boss. After being beaten by the Mario Brothers and the Prince, he apparently flees into the sewers of Princess Peach's castle. This can be seen in Mario & Luigi: Partners in Time. He can be seen using the baby Mario Brothers, where he sells badges in exchange for beans. Humorously, he does not recognize the babies but gets angry and shouts for no particular reason because of what they are wearing, red and green. His catch phrase is "I HAVE FURY!" and he often uses food to express himself when talking such as "Mustard of Doom." He returns in Mario & Luigi: Bowser's Inside Story as the central antagonist.

"Mustard of DOOM on your SANDWICH of EVIL!"
― Fawful

Fawful appears for the first time in Mario & Luigi: Superstar Saga as the self-proclaimed apprentice of Cackletta. Fawful aids Cackletta in her mission to steal Princess Peach's voice.

Since Bowser and the Mario brothers joined together to defeat the perpetrator, they board the Koopa Cruiser and fly off to the Beanbean Kingdom. During the flight, a mysterious ball of energy hits Bowser while he is standing on the deck of the Cruiser. Mario and Luigi witness the incident, but they are attacked before they can do anything. Mario and Luigi fended off Fawful, knocking off his vacuum helmet in the battle, and weakening him to the point of forfeiting the fight. However, Fawful substitutes another helmet, and sends the Koopa Cruiser falling from the sky, and eventually crashing it into Stardust Fields.

When the Mario brothers visit the Hoohoo Village, Fawful terrorizes the guards, and if the brothers attempt to exit the village by navigating the mountains to the west of the settlement, Fawful generates a stone to fall off the mountain and block the path of the plumbers.

During Cackletta's conquest of the Beanbean Kingdom castle, Fawful accompanied Cackletta in tricking the Mario brothers into plumbing the castle's sewer system, and feeding the Belly Belch Worm to the then-mutated Queen Bean.

The evil duo then tries to awaken the legendary Beanstar with Princess Peach's stolen voice, but their plan was ruined when they accidentally stole Birdo's voice. The horrid voice of Birdo compelled the Beanstar to break through the floor and appear in front of Mario and Luigi. After defeating Cackletta, who planned on obtaining the Beanstar, Fawful uses his helmet to gain more power to fight the Mario brothers. Before he can battle the plumbers, Prince Peasly attacks the duo and sends them flying towards unknown territory. Fawful and Cackletta landed in Stardust Fields and hijacked Bowser's unconscious body to create "Bowletta."

They reappear in Little Fungitown, after using Cackletta's Koopa Cruiser, and in Joke's End, where Fawful mistakes a fake Beanstar and steals the real Beanstar. Luigi then disguises himself as Princess Peach to win back the Beanstar.

Fawful's final appearance is when he battles the brothers in Bowser's Castle, this time, being much stronger and possessing more abilities. Mario and Luigi defeated him, and he was thrown out of the castle, and assumed dead (although this was later proven wrong in Mario & Luigi: Partners in Time). A supposed apparition of him appears during the final battle as one of Cackletta's attacks.

Fawful does not have a prominent role in Mario & Luigi: Partners in Time. He is found under Peach's Castle, in the pipeline area. When he first appears, he is a hooded figure with large teeth and bright blue eyes. Baby Mario and Baby Luigi can tunnel into one of the pipes where they can find Fawful's Bean Shop, where Mario and Luigi can trade their beans for various items and badges.

Fawful is the main antagonist for the majority of Mario & Luigi: Bowser's Inside Story. He often uses his new catch phrase called "I HAVE CHORTLES!", similar to his previous catch phrase.

Fawful causes a mysterious illness, the Blorbs, by selling Blorb Shrooms to local residents of the Mushroom Kingdom. When a defeated Bowser is tossed into Dimble Wood, Fawful wears a grey cloak hiding his identity. He gives Bowser a Vacuum Mushroom telling him it is a Lucky Mushroom, and will allow him to beat Mario. Instead, it causes Bowser to start sucking up everything in sight. Fawful makes Bowser vacuum up everyone in Peach's Castle, including Mario, Luigi, Princess Peach, Starlow, Toadsworth, Toadbert, and several other Toads. Then Bowser falls unconscious, and Fawful makes his new minion, Midbus, carry Bowser to a cave in Cavi Cape.

Bowser awakens and finds Fawful and Midbus outside the cave. Fawful tells Bowser that Bowser's Castle has been taken by Fawful, and that Fawful will also take Peach's Castle. Bowser and Midbus fight, but the Vacuum Mushroom makes Bowser "feel cruddy." Fawful and Midbus leave, leaving Bowser behind. Fawful next appears in Bowser's Castle, where he prepares a cage fight between Bowser and Midbus. After Bowser wins, Fawful lets Bowser have a feast, causing him to chub out and get stuck in the floor. The Mario Bros. enter rescue Princess Peach from an area inside Bowser's body, who tells them about the Dark Star and Fawful's desire for it. Fawful uses the situation to his advantage grab Princess Peach from Bowser's body. The Mario Bros. exit Bowser's body to try and stop Fawful from obtaining the Dark Star, but they are too late and Fawful escapes.

After Bowser and the Mario Bros. gain access to Peach's Castle, Bowser meets Fawful and Midbus again. This time, Fawful powers up Midbus into Blizzard Midbus. Bowser ultimately defeats Blizzard Midbus, but Fawful manages to use Peach to awaken the Dark Star. Fawful uses his vacuum to siphon power from the Dark Star, becoming Dark Fawful, but Bowser punches him before he obtains all of the power. Bowser finds Dark Fawful outside the castle. Dark Fawful reveals he made upgrades to the castle, and it attacks Bowser. Bowser grows into Giant Bowser and defeats the castle. Bowser once again enters the castle to find Fawful. In the meeting room, Bowser fights Dark Fawful. Fawful is defeated, and turns into a dark insectoid. Fawful is vacuumed up by the Dark Star, now known as Dark Bowser. At the top of Peach's Castle, Mario, Luigi, and Bowser face off against Dark Bowser. When Mario and Luigi destroy the Dark Star core on Fawful, the Dark Star is finally destroyed. However, Fawful is still alive, and reveals himself to the Mario Bros. Fawful then explodes, reversing the effects of the Vacuum Mushroom, and causing Bowser to spew out everything that he inhales.

Fawful reappears in this 3DS remake serving the same role as in the original game. However, he is also the main antagonist of the game's side-story Minion Quest: The Search for Bowser. In Minion Quest, Fawful brainwashes many of Bowser's minions under his command by spraying them with a gas that only minions with unwavering loyalty (or high “Minion Spirit”) are immune to. Fawful originally planned to enslave Bowser, who he found unconscious on Hoohoo Mountain, but after Bowser awakened and escaped his grasp, Fawful decided to brainwash the Koopalings instead with an extremely potent version of his mind-controlling gas. Fawful then ordered them to conquer different parts of the Beanbean Kingdom so he and Cackletta can take control of it entirely. However, Captain Goomba and his Goomba Squad managed to defeat each Koopaling in battle, freeing them from mind control and relinquishing each region they’ve conquered. Fawful fought the Goomba Squad at Bowser’s Castle where he was seemingly defeated. Although this was a ruse to trick the squad into working for Bowletta (who was disguised as Bowser). When Fawful was confronted by them a second time, he sent them down into the lower parts of the castle, where he battles them with his robotic forces and was eventually defeated for real, thus ending his plans. However, this presumably takes place before the events of his final battle since he was still within the castle.

Fawful serves as the main antagonist in the 3DS remake of Mario & Luigi: Bowser's Inside Story. In the game's side-story Bowser Jr.'s Journey, Fawful is the bigger bad, as he is the one who assigned the Best Fitness Friends to steal Bowser's Castle from Bowser Jr. and the Koopa Troop while Bowser is away. He only appears twice in the mode, at the beginning where he instructs the Best Fitness Friends to infiltrate Bowser's Castle while he captures Bowser at Peach's Castle. Later in Dimble Wood, Fawful obtains a Vacuum Shroom from Dieter and uses it to make Bowser suck up Peach and the Mario Bros.

Fawful appeared in Super Smash Bros. Ultimate as a spirit. 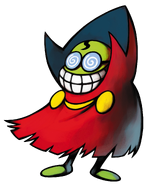