Mario or Luigi has to fight seven of them (one in each castle). If Mario or Luigi shoot fireballs at them, it will reveal the enemies from their disguises, but if they hit the axe then the imposter will simply fall into the lava. The real Bowser is found in World 8.

A Fake Tail Bowser makes an appearance in Super Mario 3D Land. Once Mario hits the button at the end of the bridge, Fake tail Bowser gets dunked into the lava and transforms back into an enemy with a Tanooki Tail. Fake Tail Bowsers are almost identical to the normal Bowser, but in Super Mario 3D Land, they can be identified by their Tanooki Tails, which is evidence they used the Tanooki Leaf power-up. A Goomba is the Fake Bowser in World 1, a Magikoopa in World 5 before the real bowser finally reveals himself in World 8.

In Shadow-Play Alley, Captain Toad is cowering before the shadow of what appears to be Bowser. When a player investigates further, they will find a cut-out that is making the shadow. Knock it down for a green star.

In Super Mario Bros. The Lost Levels, blue versions of Bowser appear in various fortresses. These are not the real Bowser and are not the bosses of the level. In fact, in some levels you can even skip them entirely.

In the game, Dream Figure Skating, a Fake Bowser chases the players until defeated. Once vanquished, it turns into a Goomba and a Super Leaf.

King Boo uses a Bowser decoy in Luigi's Mansion during the final battle, which may be loosely (or distinctly) based on the Fake Bowsers.

There is an area where Mario must complete a 2D area which has a cut-out Bowser in it. When Mario hits the axe, the cut-out will fall.

A Fake Bowser appears as a battle card.

Fake Bowser was originally a glitch, but Mario creator Shigeru Miyamoto thought it would be a good idea if they did not change it.

Artwork of a Fake Bowser in Super Mario 3D Land. 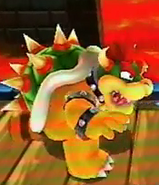