Minion Quest: The Search for Bowser (2017)
The Elite Trio is a group of three members, one of Bowser's most trusted minions: Corporal Paraplonk, Sergeant Guy, and Private Goomp (a Koopa Paratroopa, Shy Guy, and Goomba respectively).

In the game, the trio is trying to take Bowser's Castle with a giant Banzai Bill Blaster. With the help of their king Bowser, they fire the Banzai Bill.

They accompany Bowser several other times in the game. Because of the Elite Trio, Bowser gains info about one of the legendary Star Cures. They also watch him destroy the Fawful Express. In the game, it is shown they are easily fooled as they say they are "bribed" by Fawful.

Bowser is deeply disturbed by the bribery and banishes them from the Koopa Troop. After the credits, they ask to rejoin the Koopa Troop and apologize about Fawful. They have to help Bowser with castle repairs and they are put back in the Troop. Later, they become members of Bowser's top guard.

The Elite Trio were promoted to Bowser's royal guard on their visit to Pi'illo Island. They mainly serve Kamek and criticized by Starlow for not looking like they would be in Bowser's top guard. They appear alongside Kamek when Mario and Dreamy Luigi are going to Dream's Deep.

They later appear in Dreamy Driftwood Shore after Mario uses three dream eggs to expand the Dream World. After the fake Princess Peach is revealed to be Kamek, the Elite Trio must be fought for the first time in the series. During the fight, they have to defeat all three of them at once. They were easily defeated by the Mario Bros.

Their final appearance is in Neo Bowser Castle when they roll Bob-ombs so Mario and Luigi can't get to Bowser and Antasma. In the after-credist, they accidentally destroy Bowser's Koopa Clown Car, as a result, it falls into the water. They are also fought in the Battle Ring as Elite Trio X. 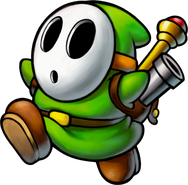