Junior Shrooboid
Elder Shrooboid is a boss in Mario & Luigi: Partners in Time. He is the fifth major boss and he is also conceived by many fans to be the most annoying boss in the game, because just as Toadbert was going to divulge paramount data pertaining to the game's plot, this boss steams in, and turns Toadbert and Kylie Koopa into Shroob Mushrooms, before turning his attention on the heroes. Defeating this boss will receive you the fifth Cobalt Star shard (the last is held by Princess Peach and is unobtainable).

This boss is completely red, with yellow dots and four horns around his head (protecting him from jump attacks normally, but that can be negated by blocking his iron ball attack). He looks somewhat from his sibling, Junior Shrooboid, who is the first boss in the game.

The Elder Shrooboid has two attacks. First, he can throw fireballs that must be jumped over. Second, he can trap the Mario brothers via crystal prisons and the brothers must jump to break out and then dodge the ball and his stumbling body. His third attack involves him attacking by throwing an iron ball that circles around the Bros, who must block it with a hammer strike before it loses its inertia, causing it to roll into them. Blocking the Elder Shrooboid's Iron Ball causes him to fall on his front, at which point he can be stomped safely for one turn. In the second phase of the battle, the Elder Shrooboid grows huge, and sets a timer to his battle, forcing the heroes to beat him within four turns, though the timer can be extended by blocking his iron ball attack. 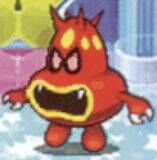