The Egg 1 a kart that appears in the Mario Kart series. It is in the shape of a green Yoshi Egg, with a yellow rim around the top, two grey exhaust pipes at the back and a grey chassis at the lower front, resembling the chassis on the Pipe Frame. It is usually equipped with small tires.

It is the Turbo Yoshi's successor from Mario Kart: Double Dash!!.

The Egg 1 is one out of the four karts in Mario Kart DS that are the best for snaking, with the other three being Dry Bones' Dry Bomber, Luigi's Poltergust 4000 and R.O.B.'s ROB-BLS, though the Egg 1 may be a preferable choice. Its weight rivals Toad's Mushmellow, and it shares its item stat with all other characters' lighter karts.

It returns in Mario Kart 7 as an unlockable Retro Kart body. It gives a boost in acceleration, whilst hindering speed and weight. In terms of hidden stats, the Egg 1 has the best sea speed in the game, tied with Tiny Tug, and also gives a boost in air speed, mini-turbo and drift.

A computer-controlled Princess Peach or Wario may use the Egg 1, usually equipped with Monster tires for Peach, Roller for Wario and equipping it with the Parafoil.

Also, equipping the Egg 1 with Roller tires will resemble the original Mario Kart DS version, with the only difference is the center of the tires is silver instead of orange.

The Egg 1 makes an appearance in Mario Kart Tour, and is classified as a Super kart.

The Egg 1 appears as a trophy in Super Smash Bros. for Nintendo 3DS. It uses the Mario Kart 7 rendition. 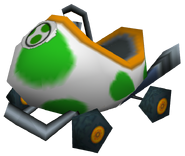 Data-rendered model of the Egg 1 from Mario Kart DS.

Yoshi powersliding in the Egg 1.

The Egg 1 as it appear in Mario Kart DS.

Yoshi driving in the Egg 1 on GCN Yoshi Circuit in Mario Kart Tour along with Birdo, Birdo (Yellow) and Birdo (Blue).
Add a photo to this gallery
Retrieved from "https://mario.fandom.com/wiki/Egg_1?oldid=300730"
Community content is available under CC-BY-SA unless otherwise noted.