Fire Flower
Starman
Eep-Cheeps (also known as Cheep-Cheep Schools or Golden Cheep-Cheeps) are a sub-species of the Cheep-Cheep, that first appear in New Super Mario Bros. Wii. They are commonly seen deep underwater traveling in schools and are much more timid than the average Cheep-Cheep as they swim away from the heroes as they get close. They resemble Cheep-Cheeps but are colored yellow instead of red.

They travel in schools, and will swim away from Mario when he gets close. Like Cheep-Cheeps, fireballs will defeat them and ice balls will freeze them in ice blocks.They are mostly found near coins or make shapes with the coins. They usually have a set path that that stick to.

Eep-Cheeps (under the name Cheep-Cheep Schools (singular Golden Cheep-Cheep) in this game) first appear in New Super Mario Bros. Wii. They are seen in World 1-4 and various levels of World 4. They are always seen swimming in large numbers together and as Mario, Luigi, and/or the Toads approach, they swim away (either up or down) pretty much clearing the path for them to cross (the exact opposite behavior of a Deep-Cheep). Despite this, they can still harm the heroes upon contact. An Eep-Cheep can be defeated with the effects of a Fire Flower or Starman. The use of an Ice Flower or Penguin Suit can also freeze them.

While Eep-Cheeps don't physically appear in Mario Kart Tour, an Eep-Cheep (alongside a Cheep-Cheep and Deep-Cheep) are seen on the Cheep Cheep Mask Glider.

Animal Crossing Pocket Camp: In Fishing Tourney 12, the Eep-Cheep is one of the tourney fish. 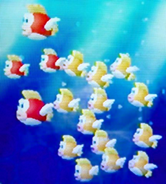 A Beta sprite of an Eep-Cheep from Super Mario Bros. 3.