A time machine powered by a Cobalt Star.

Toadsworth was worried sick for Princess Peach despite E. Gadd reassuring him that "there's a 99.999999999% that [Peach] will return". Mario grabbed the Refreshroom from Toadsworth's room and revived him. After the time machine returned, a Junior Shrooboid appeared from it. Mario defeated the Junior Shrooboid and the Toad checked in the time machine, realizing there was no sign of Peach. E Gadd stated to Toad that the Junior Shrooboid did not eat her. Professor E Gadd's DS time radar senses Peach is "somewhere in the Mushroom Kingdom of yesteryear". 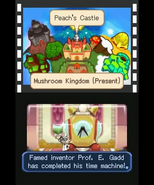