Charles Martinet
When Mario works as a doctor, his persona is called Dr. Mario. Dr. Mario debuted in Dr. Mario on the Nintendo Entertainment System, a puzzle game where the player lines up the colors of Megavitamins to destroy germs. 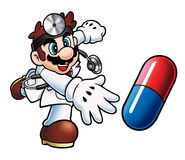