"I am Dr. Crygor, the genius scholar. The others have said a "dangerous" scholar, but I pay no mind to their opinions. My laboratory is set up to further my experiments in reality games. Feel free to stop by and contribute to my research. It is quite fun. Did you know that I was the one who created Wario's car? What? You do not know? Do your research!"
― Dr. Crygor, WarioWare, Inc.: Mega Microgame$! instruction booklet

Dr. Crygor is a 103-year-old scientist who has invented many machines: the Wario Bike, Mike; the singing, cleaning robot, and the Super MakerMatic 21. Dr. Crygor has a granddaughter named Penny as seen in WarioWare: Smooth Moves.

Dr. Crygor is a fair-skinned human who used to wear a yellow suit, a mechanical hand and foot. In WarioWare Gold, Dr. Crygor wears a blue visor and metal components; it was not explicit about himself wearing them.

Dr. Crygor is a brainy inventor who tends to be cocky in some situations. Dr. Crygor relies on Mike, his robot.

Dr. Crygor does not use his powers, but he used abilities. Dr. Crygor has invented items, transportation and weapons for himself and his employees. In WarioWare Gold, Dr. Crygor skilfully runs while Doris was chasing after him.

In WarioWare, Inc.: Mega Microgame$!, Dr. Crygor was called to create microgames for his upcoming game. His microgame genre is "Reality" associating objects ripped from photographs.

His story starts with him dancing in his lab. Drinking the blue liquid, it results food poisoning, he goes in the restroom. After he was finished, the toilet sprouts and floods his lab, he escapes his lab and activates his jetpack; however, it does not work which he falls and was saved by Don the Sparrow who flies him to safety.

In WarioWare Gold, Dr. Crygor has "Twist" microgames and its genre is "Sport". His story involves him in a haunted forest when he discovers Doris 1 who is abandoned by him which she assumes he left her to die. She runs after Dr. Crygor in the microgame gameplay. He also appears in Penny's stage. Dr. Crygor was her test subject. Penny told him that its the way to become a pop star. He tells her that he supports her. When he drank the Tonally Transformative Elixir, his voice changed but a stomachache. Penny cures him the Super-Special Tummy Tonic. In her level, if the player wins the microgame, he feels better while Penny cheers and the tonic defeats the virus. If the player loses the microgame, Dr. Crygor gets the stomachache while Penny holds him and the virus defeats the tonic. If the player loses all lives, Dr. Crygor faints to the ground leaving Penny shocked. After beating the Boss Stage, Penny asks him if he feels better. He tells her that he feels much better. He asked when the effects will wear off. Overall, the effects will not wear off staight away as Penny is seen stammering.

Dr. Crygor appears as a spirit in Super Smash Bros. Ultimate. His spirit can be found at the Light Realm of Base sub-area; he is one of the spirits who is associated to technology. 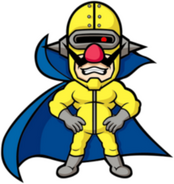 Retrieved from "https://mario.fandom.com/wiki/Dr._Crygor?oldid=274474"
Community content is available under CC-BY-SA unless otherwise noted.