MarioWiki
Register
Don't have an account?
Sign In
Advertisement
in: Characters, Undead, Bosses in Paper Mario: The Thousand-Year Door,
and 5 more
English

"See? Your friends ditch you because you don't have the charisma of me, Super Mario!"
― Doopliss

Doopliss is one of the bosses, and a recurring character, in Paper Mario: The Thousand-Year Door.

Doopliss, like that of any other Duplighost, wears a large white sheet over himself, however, the color scheme of his outfit is different than that of a regular Duplighost. His sheet is more white, his shoes are a red-ish orange, and he wears a small bow-tie and a blue hat with orange stars.

He shows a very childish behavior upon his first meet with Mario. Doopliss is simply watching T.V. in his "me time." Doopliss is just thinking of new pranks to play on the Twilight Towners, and Mario enters the room unannounced angers Doopliss. This type of behavior is shown every time Mario defeats him and his plans as well, resulting in Doopliss screaming and yelling. Doopliss also commonly refers to Mario by "Slick" rather than his real name.

Like how the Duplighosts in Paper Mario can transform into Mario's partners, Doopliss has, and uses, the ability to transform into a Mario look-alike. In this form, he looks slightly tired and angry while taking on the looks of the hero, Mario. He also uses this ability in later confrontations with Mario and his party.

Chapter 4: For Pigs the Bell Tolls

During the late parts of Chapter 4 of Paper Mario: The Thousand-Year Door, Mario finds his way to the top of Creepy Steeple. It is here he first confronts the evil terrorizing Doopliss. After some slight talking, Doopliss attacks Mario and the two square off, leaving the Ruby Star Doopliss became in possession of to the victor. During this battle, while Doopliss' statistics are still revealed, his name doesn't appear with the use of Tattle, being replaced with "?????"

After the battle ends, Doopliss secretly takes the form of Mario and claims to have defeated himself. Afterward, he takes the Ruby Star and leaves Creepy Steeple, leaving the bruised Mario to find his way on his own. After time, Mario makes his way back to Twilight Town. Here, he meets Vivian, who is in search of the Superbombomb she has apparently lost. Though a member of the Shadow Sirens, Mario still looks and finds the Superbombomb for her. With Vivian in his small party, Mario heads back to Creepy Steeple in search of clues about Doopliss.

After finding a secret pass into Creepy Steeple, Mario finds a lost friend of Doopliss, a Parrot, locked in a small, cold room below the manor. After talking with the bird, Mario finds that there is a missing letter, a lowercase "p." This "p" is the necessity to weaken and then defeat Doopliss. With it, Mario and Vivian leave Creepy Steeple to the shack where Doopliss is waiting for Mario. Here, the two surround Doopliss, and then tell him they've found his name, "Doopliss." Afterward, another battle ensues and upon beating him, Doopliss then escapes and isn't seen until chapter seven.

With the Shadow Sirens

Doopliss, defeated by Mario during Chapter 4, seeks help. He, in turn, finds the Shadow Sirens and begins to hatch plans and schemes with them under Sir Grodus. Doopliss' work with the Shadow Sirens is seen as he takes under the identity of Zip Toad, a pop star Toad, and later is seen after Poshley Sanctum, stealing the on-display Garnet Star.

Doopliss later reappears again in Chapter 8. The Shadow Sirens, under the command of the Shadow Queen, attack Mario while in the large courtyard of the Palace of Shadow. Doopliss and the other two members battle Mario and his party all at once, making for an interesting yet challenging battle. By the end of the game, it can be assumed that Doopliss broke away from the Shadow Sirens.

Doopliss, during all of the battles, mainly attacks by doing a flying headbutt at a character. However, being a Duplighost, his main tactic is to transform into a character of his choosing. During Chapter 4, he will only transform into Mario and was somehow able to take over Mario's body in the progress. In Chapter 8, Doopliss will be able to transform into any of Mario's partners that are present (including Mario still if he chooses). As one of the characters, Doopliss can preform their signature techniques such as when he is Mario, he'll use his Jump and hammer attacks. If he is a partner such as Koops, he'll perform the Shell Toss technique.

Fight Against Mario! No, Doopliss! 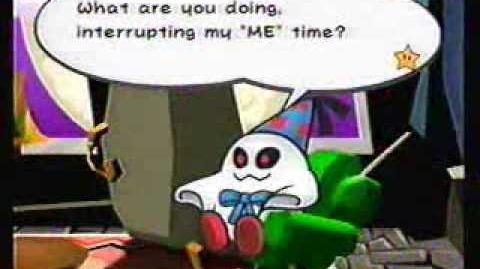