Donut Plains 1 is a course appearing in the Mario Kart series.

In Super Mario Kart, Donut Plains 1 is the second course of the Mushroom Cup. It features a lake that is crossed by using a bridge. While a vast majority of this lake is enshrouded in crash barriers, there remains the occasional spot that the player can fall into the water. This should not happen, however, as such a mistake is very easily avoided. Immediately preceding the target line is a large lake of mud - unconnected to the aforementioned lake - that makes control of karts very difficult indeed. The track is quite curvy, as well, so watch out.

In Mario Kart: Super Circuit, Donut Plains 1 - similar to that of Super Mario Kart - is the second track from the Extra Mushroom Cup. It uses the background from Riverside Park, and an item box has been added to the right side of the start of the bend next to the side of the lake that used to have no crash barrier. The pipes on the roadside have been removed from this version of the course.

In Mario Kart DS, Donut Plains 1 is the first course of the Banana Cup. Similar to every other Retro Super Mario Kart track in Mario Kart DS, it's only got three laps as an oppose to the original five. It is not available in Wi-Fi mode. 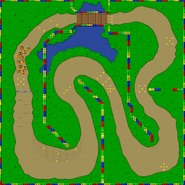 The map of the course.

The course as it appears in Mario Kart DS.
Add a photo to this gallery
Retrieved from "https://mario.fandom.com/wiki/Donut_Plains_1_(track)?oldid=238954"
Community content is available under CC-BY-SA unless otherwise noted.