Donkey Kong Jr. (also spelled Donkey Kong Junior in early arcade releases and home ports) is a video game for the arcades. It was released in 1982 for the arcade and for the Famicom on July 15, 1983 in Japan, in June 1986 for the United States of America, and June 15, 1

This game is the sequel to Nintendo's hit game Donkey Kong. In this game, the player is Donkey Kong's son, who is named "Donkey Kong Jr." and has to rescue his father, who is in a cage next to an exhausted Mario, and get revenge on Jumpman/Mario. Despite Mario being a protagonist in countless other Nintendo games, this is one of the few (if not the only) where Jumpman/Mario is the antagonist. 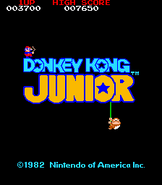 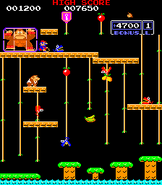 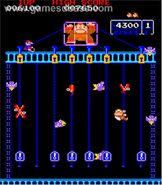 Retrieved from "https://mario.fandom.com/wiki/Donkey_Kong_Jr._(video_game)?oldid=263034"
Community content is available under CC-BY-SA unless otherwise noted.