Kong
Dixie Kong is Diddy's girlfriend and one of the more popular Kongs. Though she first appeared in Donkey Kong Country 2: Diddy's Kong Quest as Diddy Kong's sidekick, and later made the starring role of Donkey Kong Country 3: Dixie Kong's Double Trouble!. While she didn't return in Donkey Kong 64, her sister, Tiny Kong, served as her replacement. Her next time featured as a playable character was in Donkey Konga 2 on the GameCube, a bongo rhythm game. She appeared once again in the Japan only Donkey Konga 3. She is also a playable character in Diddy Kong Racing DS and Mario Super Sluggers for Wii. Dixie is remembered by her ability to twirl her hair to float downwards. Dixie Kong has secured her place as one of the main Donkey Kong characters and appears 3rd only to Donkey and Diddy.

Dixie appears as a secret playable character in Mario Superstar Baseball which is her very first appearance in the traditional Mario franchise. This is also her first sports game. In this game she is voiced by Kahoru Sasajima. In challenge mode, she can help Mario and the others beat Bowser and Bowser Jr. She is unlocked by completing Challenge Mode with Donkey Kong's team known as the DK Kongs.

In this game she appears as a technique team player on Donkey Kong's team . She has good chemistry with Donkey Kong and Diddy. She uses a stick as a bat, and the sweetspot is the middle of the stick. Her only talent is Clamber, meaning she can climb walls to catch the ball. In stats, she is tied with Baby Luigi and Toadette for the worst batting stat in the game, but she has average pitching and above average fielding and running.

Dixie Kong returns in the game Mario Super Sluggers, the sequel to Mario Superstar Baseball. She appears as a sub-character. In the Challenge Mode, she is found in the DK Jungle stadium. After being saved from the Dark Bones, Donkey Kong impulsively rushes off to the stone bridge without listening to Dixie, much to her chagrin. She asks Mario and the others to find a stone tablet, suggesting they look near the entrance/exit sign. After doing so, she joins the team, and soon insists that the returning Donkey work with Mario to save the stadium. She does not need to be unlocked in this game.

She has good chemistry with all the Kongs, but she has bad chemistry with King K. Rool and the Kritters. In stats, she is bad at pitching and batting, but she is very good at fielding and running. She uses again a stick as a bat. Her bat entrance includes her jumping and flipping and then prepares to bat. In this game, she is the fastest Kong, but is the worst Kong at batting.

Her second appearance in the Mario series was in the game Mario Hoops 3-on-3, a basketball game. It is her first appearance on the Nintendo DS. Dixie again appears as an unlockable character.

Her special shoot is the Cannon Shot, in which she starts spinning and suddenly a barrel cannon falls from the sky and catches the ball, then Dixie backflips onto the cannon and shoots the ball into the hoop, followed by a red explosion and multicolored confetti.

In this game, she is a speedy character, just like Diddy. She can also enter the tourney in which she and her team have to beat different teams.

Dixie Kong made her debut appearance in the Mario Kart series in Mario Kart Tour as the Week 2 spotlight High-End racer of the Jungle Tour. Starting with the Bowser vs. DK Tour, she is now a regular High-End driver, and starting with the 2022 Los Angeles Tour, she has her own self-named cup. Dixie Kong’s special item is the Triple Bananas, which is shared with Daisy (Swimwear), Waluigi (Bus Driver), and Donkey Kong Jr. (SNES).

Dixie Kong's emblem is derived from the design of the Dixie Kong Barrel in Donkey Kong Country: Tropical Freeze, although the characters are yellow and the background is pink. 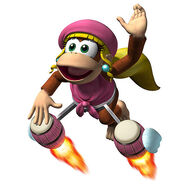 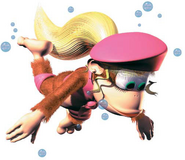 Dixie from Mario Hoops 3-on-3

Dixie from a comic

Dixie and Diddy from a comic

A trophy of Dixie 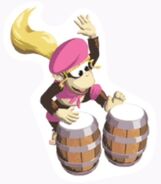 A sticker of Dixie

Dixie from a cartoon

A Dixie trophy with Diddy and Xananab trophies

Dixie with Diddy and Donkey. 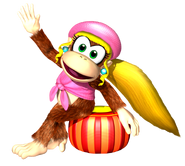 Dixie with a tire 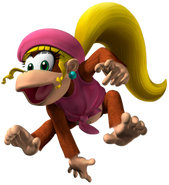