MarioWiki
Register
Don't have an account?
Sign In
Advertisement
in: Articles in need of cleanup, Characters, Characters in Donkey Kong Country,
and 23 more
English

Kong
Diddy Kong (ディディーコング, Diidī Kongu in Japanese) is a fictional character in the Donkey Kong series of video games, first appearing the 1994 game Country. He lives on Donkey Kong Island in the Kongo Jungle, and is easily identified by his red hat, which has a Nintendo logo on it, and shirt. He is Donkey Kong's nephew and sidekick in certain games.

In his first game appearance, Donkey Kong Country, Diddy idolized Donkey Kong and wished to become a big, strong video game hero just like him. To humor him, Donkey Kong put him in charge of guarding his banana hoard at night. However, neither of them expected a siege by King K. Rool's Kremling Krew that same night, and as such, Donkey Kong's entire banana hoard was stolen and Diddy was forcefully stuffed into a nearby barrel. Upon being freed, Diddy explained the situation to Donkey Kong, who became extremely upset, but didn't blame him. He and Diddy went on an adventure across DK Island to get the banana hoard back.[2] Diddy's second appearance was on the Game Boy title Donkey Kong Land. In this game, Cranky Kong made a challenge that DK and Diddy couldn't retrieve the banana hoard on an 8-bit system, so they once again set out to retrieve it.[3]

It wasn't until 1995's Donkey Kong Country 2: Diddy's Kong Quest that Diddy Kong stepped into the starring role. With Donkey Kong kidnapped by K. Rool and taken to the Kremling home of Crocodile Isle, Diddy set out with his new girlfriend Dixie Kong to get his big buddy back.[4] For this game Diddy's look was slightly updated. He gained the now permanent star pattern for his shirt, Nintendo logo for his hat, updated fur, nostrils and even a belly button. At the conclusion of the game, Diddy finally became a full-fledged video game hero. A follow-up was released in September of 1996 for the Game Boy called Donkey Kong Land 2. It featured roughly the same plot as DKC2.

When Donkey Kong Country 3: Dixie Kong's Double Trouble! came out two months later, Diddy wasn't playable for the first time. Instead, the storyline revolved around him and Donkey Kong disappearing while on vacation in the Northern Kremisphere. Meanwhile, an army of Kremlings had appeared in the area under the command of a fake new leader, the cyborg KAOS. Dixie and her cousin Kiddy Kong went on a mission to find them.[5] As it turned out, K. Rool was manipulating things behind the scenes, with KAOS feeding off the brain power of Diddy and DK (who were inside of the mechanical monster). In 1997's Donkey Kong Land III, Diddy appeared as a cameo. His appearance was on the extra life balloons, instead of Dixie Kong. He was also part of the storyline. He and DK took off in a previously unseen part of the Northern Kremisphere in a contest to find the fabled Lost World. Dixie, furious that she wasn't asked along, decided to join forces with Kiddy and find it herself.[6] Of course, K. Rool and the Kremlings also got involved, and while KAOS appeared again, he wasn't being powered by Diddy or DK.

Two months after Donkey Kong Land III, Diddy made his Nintendo 64 debut, and got his first starring role without any other Kong characters appearing. Diddy Kong Racing took the kart racing genre in a new direction with go-karts, planes, and hovercraft as available vehicles. Instead of a straightforward racing game like the Mario Kart series, Diddy Kong Racing was a "racing adventure," a mixture between Mario Kart and Super Mario 64. Diddy Kong Racing was the first self-published title by Rare, and marked the first appearance of such characters as Banjo and Tiptup (who would go on to star in the Banjo-Kazooie series).Diddy's childhood friend Timber sends him a letter to help liberate the island, and he answers the call in secret while Timber's parents are visiting his own family. Diddy Kong Racing broke records when first released for having the highest number of pre-orders of any video game to date. The game even featured a unique promotion where gamers received a free Diddy Kong beanbag toy with buying the game. Later the toy was offered in stores.

Two years later he would appear in Donkey Kong 64; initially he was imprisoned by K. Rool, but once rescued became a playable character. Joining forces with Donkey Kong, Dixie's little sister Tiny Kong, Kiddy Kong's older brother Chunky Kong, and distant cousin Lanky Kong, they set off to stop K. Rool from blowing up DK Island with his new mechanical Crocodile Isle and the Blast O'Matic laser. Unlike the DKC games, this was a sprawling 3-D adventure in the vein of Super Mario 64, and it was the first N64 game to require the N64 Expansion Pak to play. In this game, Diddy's color was red, his musical instrument of choice was an electrical rock guitar, and his signature move was using a jetpack in order to fly while using Crystal Coconuts. He also could use his tail to leap high in the air when on a blue Pad, and he could also Chimpy Charge into objects like gongs.

A port of Donkey Kong Country came out a year later for the Game Boy Color. It had new features such as Game Boy Printer connectivity, extra mini-games, and an entirely new stage in Chimp Caverns called Necky's Nutmare. After DKC GBC, Diddy Kong fell off the gaming radar, not appearing for nearly three years.

Diddy returned in 2003 with a Game Boy Advance port of Donkey Kong Country, which was a retelling of his original adventure with Donkey Kong. It featured new map screens and new modes of play like DK Attack and Hero Mode, where the player had to beat the game with only Diddy (sporting yellow clothes).

Diddy's debut in a Mario series and GameCube game was in Mario Golf: Toadstool Tour. This was also the first time he appeared in a non-Rareware game (the company was sold to Microsoft in 2002). His appearance in this and most subsequent non-Rare appearances depicted him with five fingers and toes instead of four (the same would later go to Dixie Kong).

He turned up in another kart racing game, Mario Kart: Double Dash!!, where he rode along with Donkey Kong and tossed giant banana peels for his special item. Not only did they cause cars that hit them to go spinning, they then broke apart into 3 smaller banana peels.

In 2004, the first non-Rare Donkey Kong game with DKC-styled characters was released. Namco's Donkey Konga was a GameCube music title that was packaged with a DK Bongo controller. The controller is used to keep the rhythm with the beats of covers to famous songs (as well as Nintendo video game music). Diddy appeared along with Donkey Kong and other DKC franchise characters. He would also turn up that year in Mario Power Tennis, as a playable character, Katsumi Suzuki 's first time voicing as Diddy Kong, and in a Game Boy Advance port of Donkey Kong Country 2 that was packed with new mini-games and more.

The year 2005 saw him in the sequel to Donkey Konga, Donkey Konga 2, where he once again stood as the character controlled by a second bongo player. He was then a team sub-captain in Mario Superstar Baseball (his biggest role yet in a Mario game). He was mainly known as a speed player with excellent defensive skills. He has a slight uppercut in his swing. He also had a prominent role in DK-King of Swing, and would make a cameo in the GBA port of Donkey Kong Country 3.

In 2006, Diddy was featured as a playable character in Mario Hoops 3-on-3 for the Nintendo DS.

In 2007, a remake of Diddy Kong Racing was released for the Nintendo DS, largely based on the N64 title bearing the same name. This time both Dixie Kong and Tiny Kong were playable alongside Diddy, and Taj and Wizpig were made into additional unlockable characters in the game. Diddy later made his Wii debut in Mario Strikers Charged, where he plays another big role as a soccer team captain among the other Mario characters.

Diddy Kong appeared in Mario Party DS and rewarded Mario's team with one of the five star pieces when they freed Donkey Kong from Dry Bones.

Diddy Kong appears in both Donkey Kong Barrel Blast and DK Jungle Climber as a playable character. He also appears in Super Smash Bros. Brawl, in which some of his attacks are based around the ones he has in Donkey Kong 64, such as the Peanut Popguns and Rocketbarrel Boost. [7] [8] In the Adventure Mode of the game, Subspace Emissary, Diddy Kong initially joins Donkey Kong in a quest to retrieve their stolen Banana Hoard. When they finally find it, they encounter Bowser, who turns Donkey Kong into a trophy, but not before Donkey Kong knocks Diddy Kong out of the way. Afterward, Diddy Kong teams up with Fox McCloud against a Rayquaza, Turns into a trophy, a false version of himself made, and turned back to normal and freaks out when he sees a giant false version of himself. and later on Falco Lombardi. He takes out some Primids to free Donkey Kong and teams up with Olimar and Captain Falcon. His moves are Peanut Popgun, where he fires peanuts, Monkey Flip, where he jumps on and beats up an enemy, Rocketbarrel Boost, a jet pack, and Banana Peel, where he throws a banana peel as a trap. His final smash is Rocket barrel Barrage, a combo of Peanut Popgun and Rocketbarrel Boost. His latest appearance is Mario Super Sluggers. He appears on Donkey Kong's team with Dixie Kong, Tiny Kong, Funky Kong, Baby Donkey Kong, King K. Rool, and Kritter. The intro shows him catching the ball in DK Jungle Arena, but he screams in terror when he is almost crushed by a giant barrel, Donkey Kong comes to his rescue, making him sigh in relief; not having to experience of the horror of being run over by a humongus barrel.

Diddy Kong is a newcoming fighter that is available at the start of Super Smash Bros. Brawl.

Diddy Kong is a veteran fighter that is available at the start of Super Smash Bros. 4. 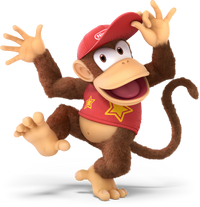 Diddy Kong was present in the World of Light opening cutscene which himself attempted to escape from Galeem by performing Rocketbarrel Boost. Himself along with Rosalina and Luma were caught by the light beams. Diddy Kong was imprisoned by Galeem where he can be found at the DK Island sub-area after all spirits are defeated.

Diddy Kong near his racing kart in Mario Kart Wii. 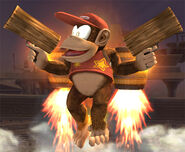 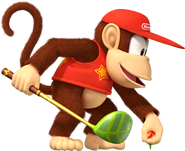 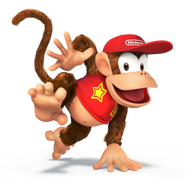 Diddy Kong as he will appear in Super Smash Bros. 3DS/Wii U. 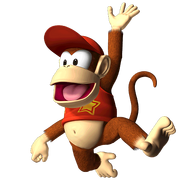 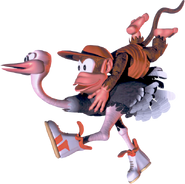 Diddy freaking out as he is almost crushed by a large barrel.