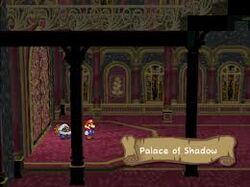 Stages, levels, or locations with a dark theme are areas usually associated with the dark or have dark/shadow-themed elements. It's one of the many reoccurring themes of the series. This theme is also referred to as shadow-themed.

Other Traits and Features

Dark-themed stages also tend to harbor the toughest enemies in a game usually newer, tricker enemies or stronger versions of enemies that appear earlier in the game. Dark-themed stages can also have numerous of hazards ranging from bottomless pits to spikes.

Retrieved from "https://mario.fandom.com/wiki/Dark_theme?oldid=220375"
Community content is available under CC-BY-SA unless otherwise noted.