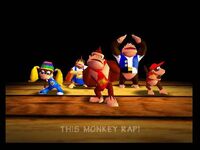 This song is well-known for using the word hell in it where it can be found in the final line of Chunky's part. It was later replaced by heck in Super Smash Bros. Melee and Super Smash Bros. Brawl. This song also appears in Donkey Konga.

Retrieved from "https://mario.fandom.com/wiki/DK_Rap?oldid=49182"
Community content is available under CC-BY-SA unless otherwise noted.