MarioWiki
Register
Don't have an account?
Sign In
Advertisement
in: Featured articles, Items, Items in Paper Mario: The Thousand-Year Door,
and 2 more
English

This item was somehow plundered by Hooktail and sent to Hooktail Castle. This began the rumor of Hooktail guarding a fabulous treasure, one that would rapidly spread. Many adventurers and treasure-seekers, including Koopley and Professor Kolorado's father, left to look for the trasure, but all were defeated by the Dull Bones or Hooktail herself. Professor Kolorado's father was defeated in the hallways, presumably by the Dull Bones, while Koopley was actually swallowed alive by Hooktail. Later, in his quest for the Crystal Stars, the location of the Star was revealed to Mario, and he set out to find it. He passed all obstacles in his way, and successfully defeated Hooktail. She then coughed up Koopley, who had found the Diamond Star while he was trapped in her stomach. He gives the Star to Mario, as a gift and reward for saving him. Mario takes the Star back to Paper Mario: The Thousand-Year Door, and holds it aloft. The Star glows brightly, and reveals the Boggly Woods on the Magical Map, the location of the Emerald Star. The Diamond Star, along with the other six Crystal Stars, later go to everywhere Mario had traveled to rally support. The Diamond Star went to Petalburg, and many of the Koopas there cheer him on.

It somehow ended up in Boggly Woods, and the rumor of The Great Tree and the Punies that inhabited it guarding a fabulous treasure began to spread. The Puni elder was told to guard it from evil and give it to a pure heart. However, Lord Crump and the X-Nauts invaded the tree in search of the Crystal Star, so the Puni Elder knew not to give it to them. In his quest for the Crystal Stars, the Emerald Star's whereabouts were revealed to Mario. He passed various obstacles before chasing Lord Crump to the tree's entrance hall, where he pulled his trump card- Magnus von Grapple, a large robot piloted by Crump, with various weapons. It was a hard battle, but in the end, Mario prevailed and Lord Crump fled, dropping the Emerald Star which the Puni elder then gave to Mario. Afterward, Mario took the Emerald Star to the Thousand-Year Door and holds it aloft. It glows brightly and reveals the whereabouts of the Gold Star- Glitzville! It later went along with the six other Crystal Stars to everywhere Mario had been to rally support. The Emerald Star went to Boggly Woods, and Punio, Petuni, the Puni elder and countless other Punies cheer Mario on.

After centuries, it somehow fell into the hands of Grubba, who used it to power a machine under the arena in Glitzville which allowed him to absorb energy from fighters. Of course, if it ever got out that he was using this machine, then he could be dismissed from his position. Naturally he had to keep his machine a secret by absorbing the energy from anyone who saw it. In his quest for the Crystal Stars, the Gold Star's whereabouts were revealed to Mario. He obtained a Blimp Ticket, went to Glitzville and fought his way to the top... only to discover that the Gold Star on the Champ's Belt was fake! However, someone named "X" was emailing him, telling him to heed her instructions if he wants the Crystal Star. Mario was already starting to piece the mystery of the arena together, and no sooner had he entered the champ's room than "X" told him to find the ghost. Mario did as instructed and went through the air vent to Grubba's office. In one of his desk drawers, Mario found the blueprint for Grubba's machine, as Grubba himself showed up. He tried to get Mario out of his office, but then Mario's partner accused him of making fighters disappear. Knowing he was cornered, Grubba fled to the arena and Mario gave chase. He found Grubba, who then revealed his machine and used it to become Macho Grubba! Eventually, Mario triumphed and Grubba's machine released Prince Mush, Jolene's brother, as well as the Gold Star. Mario took the Star to the Thousand-Year Door with him and held it aloft. It glowed very brightly and revealed the Ruby Star's whereabouts. It later went along with the six other Crystal Stars to everywhere Mario had been to rally support. The Gold Star went to Glitzville, where Jolene, Rawk Hawk, the Iron Clefts and a Shady Koopa cheered Mario on.

The Boo heroine who held it eventually hid it in Creepy Steeple after defeating the Shadow Queen, and was sealed in a black chest by her curse. The chest was eventually taken into Twilight Town where it was placed in the shop's storeroom. In his quest for the Crystal Stars, Mario learned the Ruby Star's whereabouts, although he ran into a bit of trouble as he couldn't go through the pipe to Twilight Town. However, with help from Professor Frankly and Darkly, he was able to get there. When he arrived, a bell tolled and a Twilighter who was talking to him transformed into a pig! He heard all about it from Dour, the mayor. Later, both Dour and the town gatekeeper were turned into pigs. Ignoring this, Mario made his way along Twilight Trail and eventually reached Creepy Steeple.

Finding the key, Mario unlocked a room with a spiral staircase and a trampoline at the top. Mario used this to get to a small room. The Ruby Star was in this room, as was Doopliss, a Duplighost. Mario defeated Doopliss and claimed the Crystal Star... but in reality it was not Mario who got the Star but Doopliss. Mario became a purple silhouette, his body having been stolen by Doopliss. Meanwhile, in Twilight Town, Beldam ordered Vivian to find the Superbombomb which they had lost while she and Marilyn took a siesta. Mario returned to Twilight Town, evading Doopliss on the way, and found Vivian, who was looking for the Superbombomb. Mario found it for her, but it was broken so she discarded it. This was the first time Vivian had been shown the most remote hint of kindness, so she decided to join Mario. The two returned to Creepy Steeple after listening to the crows to find out how to beat Doopliss. Eventually they found a parrot in the basement, guarding a chest with the letter Mario couldn't use to guess Doopliss's name- P! Listening to the parrot, Mario and Vivian learned Doopliss's name, and made their way out.

They confronted Doopliss, then returned to Creepy Steeple. Vivian felt stupid for helping Mario at first, but in the end she rejoined Mario, they defeated Doopliss once and for all and Vivian gave Mario his fourth Crystal Star which he took to the Thousand-Year Door, where it glowed brightly and revealed the Sapphire Star's location. It later went along with the six other Crystal Stars to everywhere Mario had been to rally support. The Ruby Star went to Twilight Town, where Mayor Dour, Eve and her children, and Darkly cheered Mario on.

The Koopa hero who held it was eventually robbed by Cortez the pirate king and sealed in a black chest which was kept in Cortez's cave. In his quest for the Crystal Stars, Mario learned of the Sapphire Star's whereabouts. With help from Flavio and Podley, Mario was able to get the help of Admiral Bobbery to get to Keelhaul Key. However, once there Bobbery, Lord Crump and a Toad were lost. Mario found all three, but Bobbery seemed to die after saving the others from the Embers.

Mario realized that Bobbery was only sleeping, and the Bob-omb was revived by a Chuckola Cola and recruit to join Mario's Party as a Partner. With Bobbery's help he was able to get into the Pirate's Grotto. Deep in the cave he found the Black Skull. Inside the ship, he confronted Cortez and emerged victorious. Cortez willingly let Mario have the Sapphire Star which he did not really like anyway... but that wasn't the end. Once Mario got outside, Lord Crump revealed himself! Flavio successfully got Cortez's help, and Mario vanquished Crump and took the Sapphire Star to the Thousand-Year Door, where it glowed brightly and revealed the Garnet Star's whereabouts. It and the other Crystal Stars later went to everywhere Mario had been to rally support. The Sapphire Star went to Keelhaul Key where Pa-Patch and some Toads cheered Mario on.

This item somehow ended up in Poshley Sanctum, a shrine to the stars, and the rumor of treasure in the Poshley Sanctum soon spread. However, the star in the antechamber of the sanctum was a red herring to counter thieves. In his quest for the Crystal Stars, Mario was alerted to the Star's whereabouts, by the Sapphire Star. Professor Frankly assured him that getting this star would be easy and Mario obtained a ticket for the Excess Express from Don Pianta. The train ride was full of troubles and mishaps, but Mario eventually got to Poshley Heights He went to the Sanctum only to watch the Shadow Sirens steal the Star! However, they had fallen for a red herring. Mario found his way into the back, claimed the real Garnet Star, and then took it to the Thousand-Year Door. It glowed brightly and revealed the location of the final Crystal Star, the Moon!

The final star, the Crystal Star, was lost for many hundreds of years. The X-Nauts found this Star hidden in Rogueport and decided inhabit the Moon. Here, the X-Naut society build their base and technology, hording this sacred stone. The most powerful of the seven stars, the Crystal Star was the last for Mario to obtain. He searched high and low and after traversing Rogueport's surrounding areas relentlessly, he was able to open the gateway to the moon. With the Bob-omb Cannon in Fahr Outpost, Mario literally, shot the moon.

After scaling the terrain and walking into the X-Naut Fortress, Mario had to solve many puzzles and eventually rebooted Peach's friend, TEC-XX. Afterward, Mario was aware of Lord Crump's presence and the two make their way for battle. In Crump's arena, the two square off for the final time. Mario and his party prepare, while Crump unleashes his most dangerous device yet, the Magnus von Grapple 2.0. This super charged robot is much more deadlier than its previous counterpart.

After a heavy battle, Mario makes his way and defeats the villain. Soon after, the seventh and final Crystal Star comes out and Crump flees. Mario collects this last star and leaves the Moon, forever. With the help of TEC-XX, the majority of the fortress was eliminated and destroyed.

The Crystal Stars each give Mario a unique ability that requires star power, similar to that of the Star Spirits in Paper Mario.

The Diamond Star's location on the map.

The Diamond Star at Hooktail Castle

The Emerald Star's location on the map. 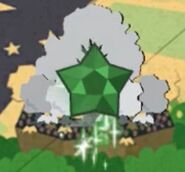 The Emerald Star at the Great Tree

The Gold Star's location on the map.

The Gold Star at Glitzville

The Ruby Star's location on the map.

The Ruby Star at the Creepy Steeple.

The Sapphire Star's location on the map.

The Sapphire Star at Keelhaul Key.

The Garnet Star's location on the map. 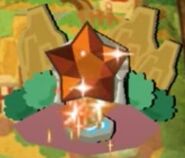 The Garnet Star at Poshley Sanctum.