Takahiro Sakurai
Cloud (full name Cloud Strife) is a playable character in the Super Smash Bros. series. He is from the Final Fantasy series and serve as the main protagonist of his first game, Final Fantasy VII.

At a young age, Cloud strove to join the illustrious Shinra organization. Instead, he was forcefully exposed to Mako poisoning, a raw energy drained from the planet itself. He gained the memories of his deceased friend, Zack, and went on to be the guardian of the Lifestream from planetary threats such as the evil Sephiroth.

During a Nintendo Direct on November 12, 2015, Cloud was announced to appear in Super Smash Bros. 4 as downloadable content. This makes him the fifth third-party character to appear in SSB4, and the first representative of Square Enix. According to series director Masahiro Sakurai, Final Fantasy characters were heavily requested by fans to appear in the Super Smash Bros. series, with Cloud Strife receiving the most support out of all of them.

Cloud is ranked 2nd out of 55 on the current tier list, placing him in the S tier and rendering him as a top-tier character. 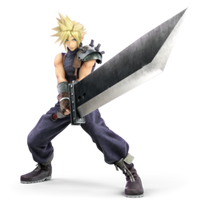 Cloud is a veteran in Super Smash Bros. Ultimate. Although his move set is largely unchanged, Cloud received noteworthy changes to his Limit Break mechanic; his Limit Gauge is now constantly displayed next to his damage meter, and a full Limit Charge must be used within 15 seconds before it depletes entirely. Like in Smash 4, Cloud remains in Japanese audio in all regions.

In Classic Mode, the name of his route is called A Ride? Not Interested. (乗り物...? 興味ないね A vehicle...? Not interested?), referencing his motion sickness and his catchphrase, "Not interested.". He fights opponents on traveling vehicle stages.