Unknown
The Cloud Kingdom (雲の国 , lit. Cloud County?), also known as Mystery Above Our Heads, is a location that appears in Super Mario Odyssey. It is a mysterious realm in the sky made up entirely of clouds. Its most notable city is the Nimbus Arena, which serves as the kingdom's main playable area in the game. This kingdom is the location of the first Bowser fight in the game, as well as the smallest kingdom within the game.

The kingdom is notable for being primarily inhabited by a race that is unknown. The primary currency of the Cloud Kingdom is unknown as well.

Life Above the Clouds

Perhaps everyone has had the experience of looking up in the clouds and imagining what it would be like to live among them. As it turns out, as fantastical as it may sound, there was once such a kingdom whose citizens looked down on the world from a fluffy, puffy paradise.

While the particles that make up a cloud are extremely small and light, researchers have recently discovered a kind of cloud-like material that one can walk on. First discovered in Fossil Falls, this substance can change into and hold new shapes and even support weight.

The discovery prompted certain researchers to open an investigation into whether there might have once been a "cloud kingdom" in the sky.

Perhaps signifying how peaceful this place is, many doves can be found living here. Supposedly, spotting a flock of doves will grant you increased happiness.

Once researchers started looking for places in the sky, they quickly found a large platform of the levitating substance, dubbed Nimbus Arena.

Mysteriously, the land had markings that accurately showed the waxing and waning phases of the moon. Now, besides the obvious "how," researchers had to question "why?"

Researchers are thus baffled by the large cloud archway here. Some theorize that it's a kind of reticle that aligns with the moon. Some evidence suggests that the arch pulled this kingdom's Moon Rock to a specific location from the moon.

The only certainty is the the Cloud Kingdom will continue to interest researchers for many years.

The investigation is concluded now and yielded few undisputed facts. But the bits of cloud that fall like flower petals here make it the most dreamlike place you'll ever visit. 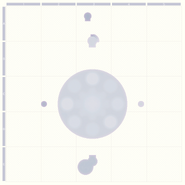 Map of the Cloud Kingdom

There are a total of 9 Power Moons in the Cloud Kingdom, none of the Power Moons can be collected (due to the boss fight with Bowser). After repairing the Odyssey, the player can return the kingdom to collect 1 Power Moon. After the player defeats Bowser in the Moon Kingdom, 1 more Power Moon becomes available to collect. The Moon Rock moons will also be available, adding 7 additional Power Moons to be accessible.

Note: That all these enemies appear only in 2D segments.