Bombs
Clem is a boss in Luigi's Mansion 3, he is on the second basement, which is the Boilerworks. Clem is the mechanic of The Last Resort, Luigi has to beat him to receive the ten floor's elevator button, he has 350HP.

Clem wears mechanic gear, he has a purple body, blond hair and eyebrows with yellow eyes and a yellow inner mouth. He wears blue cap and shirt with green gloves.

Like other ghosts such as Kruller and Chef Soulfflé, Clem is obviously not a very good employee since he is often sleeping in the game: He sleeps during the battle when there is not much action, and he sleeps in the Gallery.

When Luigi reaches Clem's fighting arena, he saw Clem sleeping again so he tried to walk as quiet as possible, but he stepped on a rubber ducky which wakes Clem up. Clem is now enraged and pushes a button that causes the room to flood. Luigi has to fight Clem with both of them floating on water, Clem will use a paper fan to attack. When he uses a spinning attack, he will get dizzy after doing the attack, Luigi has to suck Clem's tube and shoot it into the spikey side of the arena, causing Clem to land onto the ground unconsciously. Luigi also has to leave the water to flash and vacuum him, during the next time Clem gets into his tube, he will throw bombs which will prepare to explode if Luigi touches them, Luigi can also make Clem dizzy by letting the bomb blow Clem's tube. After being vacuumed, Clem will struggle to escape and release rubber duckies with the ten floor's elevator button. 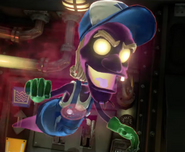 Clem after flooding the room by switching the switch.

Luigi woke Clem up before the battle.
Add a photo to this gallery

Retrieved from "https://mario.fandom.com/wiki/Clem?oldid=292496"
Community content is available under CC-BY-SA unless otherwise noted.