Cheep Cheep is a common fish species of the Mushroom Kingdom, first introduced in Super Mario Bros., where it appears as a common underwater enemy. This underwater foe lazily swims forward or leaps out of the water and soar through the air from Super Mario Bros. 3 and onward. As a species of fish, it lacks complex free-will, thus Bowser is able to cultivate them and use them as his minions.

Cheep Cheep can survive out of water; though, its means of locomotion on it varies between games, either showing it flopping around uselessly or hopping from place to place. Throughout its appearances, the attack pattern of Cheep Cheep remains consistent, slowly swimming towards the player, although Sushie, a purple Cheep Cheep and ally of Mario, is shown to be capable of such feats as belly flopping and manipulating water.

Cheep Cheeps appear also in this game, and especially in the Deep Dark Galaxy's third star, before the planet with a watermelon and tennis balls inside. They hurt Mario if touched, and they bounce for moving, making them hard to kill. They also bother the player by disfocusing them while trying to hit pieces of wood to activate a bubble shooter. It was even shown at the end of the story when celebrating the festival by jumping up and down.

Cheep Cheeps are fairly common enemies in Super Mario Odyssey. Found in the waters of the Lake Kingdom and the Seaside Kingdom, Cheep Cheeps spend their time swimming around in the waters. They can attack Mario with a spin if he gets too close. Mario can also Capture Cheep Cheeps allowing him to swim much more efficiently and quickly. Mario can also attack with a spin of his own and doesn't have to worry about running out of air.

Cheep Cheeps are absent from most derivative Mario mediums such as cartoons and literature, but one does appear in the anime film Super Mario Bros.: Peach-Hime Kyushutsu Dai Sakusen! 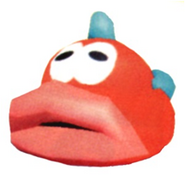 A Cheep Cheep Catch Card from Super Paper Mario.
Add a photo to this gallery

Retrieved from "https://mario.fandom.com/wiki/Cheep_Cheep?oldid=277372"
Community content is available under CC-BY-SA unless otherwise noted.