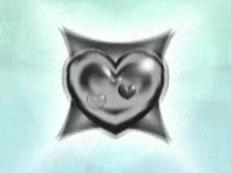 The Chaos Heart is a legendary force created by Count Bleck. It is a heart-shaped object in the Dark Prognosticus that controls The Void, effectively ending the universe. The heart can only be summoned when a furious monster king and a maiden princess wed. In the opening cutscene of Super Paper Mario, it is shown that no one can even touch it because of its immense power, rendering Luigi's jump attack useless. This is also transferred to the owner of the heart, making Count Bleck invincible.

It is created at the beginning of Super Paper Mario when Bleck forcibly marries Bowser and Princess Peach.

The Chaos Heart was once planned for Count Bleck's great grandfather to be its host but he died during its creation. his soul was then reincarnated into a man in green (possibly Luigi).

At the end of Super Paper Mario, the Pure Hearts render the Chaos Heart useless, allowing the heroes to attack Count Bleck. Later, Dimentio appears and takes control of the heart and Luigi (with a Floro Sprout), revealing the clown himself to be the dark one in prophecy. He creates Super Dimentio by fusing Luigi to the Chaos Heart. Super Dimentio seems unstoppable, but the Pure Hearts along with Count Bleck and his minions nullify the power.

Even after Dimentio is destroyed, the Chaos Heart's influence remains. Bleck summons the wedding chapel dimension once again, but this time he - Blumiere and Tippi - or Timpani are married. Because of this restoration of lost love, the Chaos Heart and its influence are destroyed forever.

Retrieved from "https://mario.fandom.com/wiki/Chaos_Heart?oldid=294387"
Community content is available under CC-BY-SA unless otherwise noted.