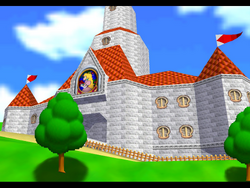 Stages, levels, or locations with a castle theme are areas associated with castles or forts. They are one of the most common, reoccurring themes in the series.

Other traits and features

One of the main traits of castle-themed stages is that the majority of the stage takes place inside of a castle. Castle-themed levels are very common as the final area of a Super Mario Bros. game. Princess Peach's Castle and Bowser's Castle are two of the most important and well known castles in the series.

Retrieved from "https://mario.fandom.com/wiki/Castle_theme?oldid=220340"
Community content is available under CC-BY-SA unless otherwise noted.