MarioWiki
Register
Don't have an account?
Sign In
Advertisement
in: Games, Wii U games, 2014 games,
and 3 more
English

Captain Toad: Treasure Tracker is a game for the Wii U featuring Captain Toad as the main character. It was released on November 13, 2014.

Captain Toad and Toadette are seen climbing some stairs and then they get a Power Star. After that they see some feathers falling down and get confused when they discover that the feathers are from a bid named Wingo swoops down and grabs the Star. The impact rends Toad stunned but Toadette tries to reclaim the star from Wingo, but due to Wingo's immense size, she is instead carried away, and later being captured.

Sometime later Wingo suddenly sees Captain Toad claiming another star and snatches it but Toad is still grabbed on it. Wingo decides to bring him to his place, Wingo's Watchtower. Toad battles Wingo and defeats him. When the credits end, Wingo's cry is heard meaning that he will return.

In Episode 2, Toad and Toadette claim another star but then feathers start dropping down which starts to make them familiarized by that when Wingo swoops down and grabs the star for him and now taking Captain Toad as a hostage and leaving Toadette on her own. Toadette rescues Captain Toad while they recover their stolen star but a tremor starts and Wingo appears and snatches Toadette with his beak and blows Toad away making him fall down.

In Episode 3, Toad awakes in a dark cave. He manages to get out and finds a Green Star, but suddenly Wingo snatches the star and laughs at Toad and flies away. Sometime Toadette manages to make Wingo loses his grip over Toadette and she escapes while Wingo doesn't notice. Toadette then catches a star but Wingo finally finds her and brings her to her tower. Captain Toad reaches Wingo's tower and battles him. Toad defeats Wingo and rescues Toadette. Wingo is last seen sitting at his tower just trying to get happy with the small amount of treasure he has now.

It uses the same gameplay elements of Captain Toad from Super Mario 3D World, except for a few differences. Instead of Green Stars, Captain Toad will collect 3 Super Gems in each level and a star is an equivalent to a goal.

The levels in this game look similar to the captain toad levels in Super Mario 3D World, but the only major difference is that they look more vibrant and there seems to be no time limit. The levels are split into four books: 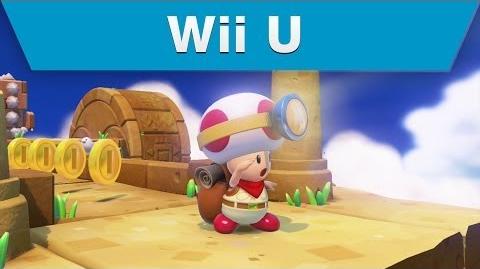 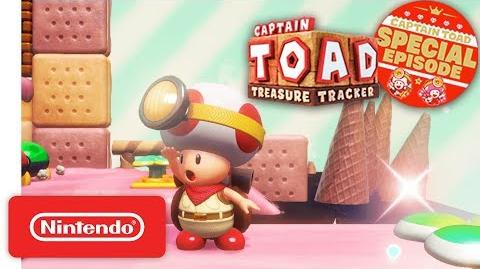