MarioWiki
Register
Don't have an account?
Sign In
Advertisement
in: Characters, Characters in Super Mario Odyssey, Allies,
and 6 more
English

View source
watch 01:25
Who is Cappy?
Do you like this video?
Play Sound

Rescue Tiara and Peach
Cappy (キヤツピー Cappy?) is a partner character introduced in Super Mario Odyssey. He assists Mario in a variety of ways throughout the game. He is the older brother of Tiara and teams up with Mario to rescue his sister. He replaces Mario's cap during the course of the game.

Cappy's default form is a large white top hat with magenta eyes. Under the hat, he has a small spectral body similar to an Eerie. Cappy can take the form of different hats, including Sombreros. His large eyes appear across all of his different appearances.

Mario can utilize Cappy in different ways, including throwing him to defeat enemies, jumping on Cappy as a platform. He can also collect coins for Mario when thrown. Cappy can possess various living and non-living objects throughout the game world. The ability is formally known as Capture.

Cappy is Mario's main partner in Super Mario Odyssey. Mario can throw Cappy in various ways; a straight-up/down shot, a circular throw, and a boomerang-like shot. Cappy can also be held in place once thrown, so Mario can jump off of him or hit objects multiple times. Cappy can help collect items such as Coins for Mario, and also damage enemies.

When thrown at certain enemies or objects, Cappy seems to "possess" them, allowing Mario to control them to get across stages. This ability is officially known as "capture". Cappy can also remove some poisonous hazards off of the ground in areas where some toxins may block Mario's path (such as the Wooded Kingdom).

When thrown at power lines, Cappy allows Mario to transform into a ball of electricity and ride along the line; this is a major mode of transportation within the game. Cappy also informs the player of various aspects of the game and of the surrounding world, such as the local currency that can only be used in that world.

Cappy joins Mario in order to rescue his sister Tiara, who has been kidnapped by Bowser along with Princess Peach. He is "energetic but a bit timid." Cappy is also controlled by player two when in co-op mode.

Prior to his physical appearance in a game, Cappy first appeared as a collectible statue in Super Mario Run.

Cappy appeared in Super Smash Bros. Ultimate. Cappy's eyes will open if Mario side taunts. Additionally, he appears as a hat for the Mii Fighters. Cappy appears as a support spirit, his ability with a "Strong Throw", references Mario throwing him in Odyssey. When the player equips his spirit, it will increase the knockback of the character's throws.

The player can summon his spirit who Ezlo and Boo Mario's core. 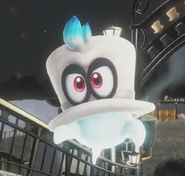 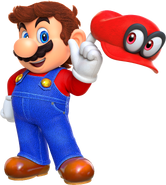 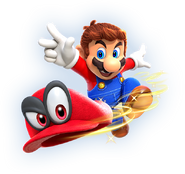 Mario & Cappy in the Sand Kingdom. 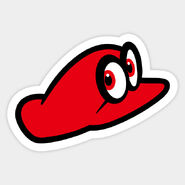