Mario, Luigi, Blue Toad, Peach, Rosalina
Boomerang Mario is a transformation introduced in the Nintendo 3DS title Super Mario 3D Land. It is based on the Boomerang Bro., making it similar to Hammer Mario, which is based on the Hammer Bro.. Mario becomes Boomerang Mario after obtaining a Boomerang Flower. With the Boomerang suit, Mario can throw one boomerang at a time to defeat enemies, destroy projectiles, and collect items from a distance[1]. Mario can also jump to dodge the boomerang to allow it to move back and forth continuously before collecting it. 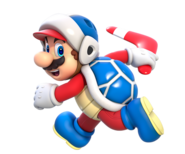 Super Mario 3D World
Add a photo to this gallery
Retrieved from "https://mario.fandom.com/wiki/Boomerang_Mario?oldid=237641"
Community content is available under CC-BY-SA unless otherwise noted.