The physical appearance of Boomerang Bros. has changed throughout the series. Early artwork depicts them identically to Hammer Bros. of that era, with orange skin along with black shells and helmets. The Boomerang Bros. in Paper Mario: The Thousand-Year Door and Super Paper Mario appear to be based on this coloration. In Super Mario Bros. 3 and its remakes, they have green skin and striped underbellies. Mario Superstar Baseball started the trend of depicting Boomerang Bros. with yellow skin and blue shells and helmets. Most games since have retained this depiction.

Boomerang Bros. also reappear in New Super Mario Bros. Wii with the same behaviour as in the previous game. However, they are very rare unlike in the predecessor, only appearing in World 2-1 where only two of them appear.

Boomerang Bros. return again in New Super Mario Bros. 2 having the same behaviour as in past instalments. In this game, Boomerang Bros. appear more common than they do in New Super Mario Bros. as well as any other game in the series appearing in five different levels being World 2-2, World 2-5, World Mushroom-Cannon, the second course of the Platform Panic Pack, and the first course of the Mystery Adventures Pack. In the latter, it is shown that they can be placed under the effects of a Gold Ring; when this happens, they toss three coins instead of their normal weapons, like the other Hammer Brother species.

Boomerang Bros. return in New Super Mario Bros. U acting the same way they did as in the predecessors, they can only be found in the level, Bouncy Cloud Boomerangs of Meringue Clouds.

Boomerang Bros only appear in the Glitz Pit in this game. A single Boomerang Bro. fights alongside a Hammer Bro. and a Fire Bro. which the trio's name is "Hamma, Bamma, and Flare." The Boomerang Bro. attacks by tossing his boomerang which can hit both Mario and his partner.

Boomerang Bros are only encountered in The Overthere in this game. They can attack by throwing their boomerangs at Mario and the others. Oddly, even though they're part of the villainous Koopa Troop, they seem to have been sent to The Overthere. However, they most likely escaped to The Overthere along with the Skellobits when Bonetail broke away from The Underwhere.

Boomerang Bros are mainly found in World 3 in this game mostly in the first level Leaflitter Path. Boomerang Bros pose a much bigger threat as they can attack Mario twice in the same turn. Sometimes when defeated, Boomerang Bros drop Boomerang stickers which Mario can pick up and use them in battle himself.

Boomerang Bros. are mainly seen in Somnom Woods. They attack mainly by throwing their Boomerangs at Mario and Luigi which the must dodge or hammer back. The Lakitus in the background help determine where the Hammer Bros. will strike.

Boomerang Bros. are common enemies first seen during the first visit of Bowser's Castle. They attack mainly by tossing their boomerangs at either Mario, Luigi, or Paper Mario then the boomerang comes back at a random character.

Boomerang Bros. reappear in Super Mario 3D World. They are a rare enemy, appearing in courses such as World 4-3, or Beep Block Skyway. They act the same way they did in previous games.

Artwork of a Boomerang Bro. from Super Mario Bros. 3. 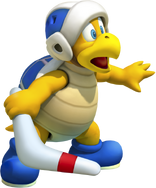 Artwork of a Boomerang Bro. in Super Mario 3D Land

A Boomerang Bro from Paper Mario: The Thousand-Year Door.

The Boomerang Bros in the second series.
Add a photo to this gallery

Retrieved from "https://mario.fandom.com/wiki/Boomerang_Bro?oldid=316754"
Community content is available under CC-BY-SA unless otherwise noted.