A Boo Guy is a ghostly version of a Shy Guy. Like the name suggests, it is simply a cross between a Shy Guy and a Boo. They first appeared in Super Mario World 2: Yoshi's Island under service of Kamek to attack Yoshi and knock Baby Mario off Yoshi's back so his other toadies can bring the Baby to him.

Despite being a ghost there isn't much difference between a regular Shy Guy's and a Boo Guy's attack and movement patterns. However, in certain levels they control various traps. One trap involves a single Boo Guy slowly raising a giant spike ball using a chain and a gear-thing, off the ground and then dropping it. However the Boo Guy constantly does this so all Yoshi has to do to avoid it is to wait for when the Boo Guy to start raising it and pass underneath it. This is the safest way since the chain actually harms Yoshi.

In Mario & Luigi: Partners in Time they are common enemies found in Toadwood Forest. It is unknown whether they are wild or loyal to Shroobs. In battle they attack by creating a mirage, and as they approach the fake disappears and the real one attacks. However they point at the Bro they will really attack so you won't fall for the fake. Later on in the game there are stronger versions called Ghoul Guys. 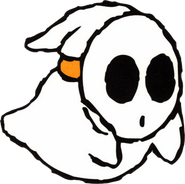 Retrieved from "https://mario.fandom.com/wiki/Boo_Guy?oldid=258429"
Community content is available under CC-BY-SA unless otherwise noted.