Bomps (also called Pushy Walls or Sliding Stones) are a subspecies of a Thwomp. They try to push Mario off his current elevation. They mainly act in a similar manner as if they were obstacles. Bomps are indestructible in all of their appearances.

Bomps first appear in Super Mario 64. Encountered first in Whomp's Fortress, these moving roadblocks appear in the same style as the walls that surround them, except they have eyes. Their eyes appear blue in color. Found early in the level, their role is to push Mario off the cliff to the platform below, wasting time. Out of the Bomps found here, the ones at the beginning and end of their row appear thinner than the ones found in the middle of the row. They are also found in other levels, such as Lethal Lava Land. In Super Mario 64 DS, they do not have eyes.

Bomps reappear in Super Mario Galaxy, but they now have a more Thwomp-like shape and face. These obstacles appear in the Buoy Base Galaxy and later in the Freezeflame Galaxy.

Bomps appear again in Paper Mario: Sticker Star, the first game where they are referred to by their current name. In this game, they are found in Chomp Ruins where they slide out of the walls. In this game, they are much quicker and can also be used as platforms. In one section of the level, one is flipped upside down and must be Paperized and flipped the right way up in order to progress. Aditionally, there are several Bomps that slide out of the waterfalls in patterns and Mario must time their movements to avoid being pushed off. To fit the Ruins theme, Bomps are brown in this game. Additionally, Bomps are smaller in this game. 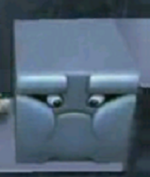 A Bomp from Super Mario Galaxy