MarioWiki
Register
Don't have an account?
Sign In
Advertisement
in: Characters, Pages with section stubs, Characters in Paper Mario: The Origami King,
and 5 more
English

"So off I went, lost and alone, on a journey to try and remember... well, anything."
― Bob-omb, Paper Mario: The Origami King

Bob-omb (ボムへい Bob-omb?) nicknamed Bobby by Olivia is one of Mario's partners on his journey in Paper Mario: The Origami King. He is a paper Bob-omb Paper Mario and Olivia meet on their journey to Autumn Mountain while riding the tram.

When Bobby first meet Mario, he is a normal paper Bob-omb without his fuse.[1] He is a paper figure, with a black round bomb and two big brown shoes. In later of the game, Bob-omb can get his fuse back by finish his mission.

While Bobby has no memories, he is an enthusiastic Bob-omb with gumption.[1]

Bobby while under his amnesia seems a bit chicken. He avoids going in dangerous places like the Water Vellumental's Shrine and the Ninja Attraction while claiming it's too kiddy for him, and he is much more grown up.

Bobby is trapped inside a tram on Overlook Mountain. Mario and Olivia cannot see him, just hearing his voice. After cutting the Red Streamer, the tram station is released. Mario and Olivia find the Bob-omb on the same tram ride with them. He is invited to Mario's party by Olivia.

Throughout the Blue Streamer, Bobby is seen getting lost and into trouble very frequently, such as in Autumn Mountain's tall grass, and in Chestnut Valley. This leads Mario and Olivia to wander around these areas searching for Bobby. They need Bobby to unlock the door to the Water Vellumental's shrine, however the later decided not to go inside the shrine.

After Mario defeat the Water Vellumental, they escaped the mountain through the Eddy River into the Shogun Studio.

In Shogun Studios, Bobby continues travel along with Mario and Olivia. He helped them finding the items needed to unlock the gate into the Big Sho' Theater. Inside the Big Sho' Theater, Mario is forced to join the stage, while Olivia and Bobby watch.

After Mario defeat the Rubber Band and the Blue Streamer get destroyed, the party went out into a celebration. The large firework show freeze Bobby for a bit, giving back his memories. Bobby wanted to part away, but Olivia asked him back to the party.

After Olivia is trapped, Bobby instructs Mario to sail into the Great Sea where an important object of his resides. The two travel to The Princess Peach, a cruise ship that has been wrecked and seemingly abandoned. After restoring power to the ship, rescuing the toads, and defeating Gooper Blooper, Bobby retrieves his "important item."

Early into the Yellow Streamer, Mario Olivia and Bobby encounter Olly. Olivia gets crushed by a boulder sent by Olly in the Sweetpaper Valley. Bobby then ask Mario to travel to the Princess Peach Cruise. After the travel to Princess Peach Cruise, Mario and Bobby retrieve the later important item. The group then return to the boulder where Olivia is trapped, Bobby reveal the item to be a fuse, then he put the fuse on him and sacrifice himself to destroy the boulder, freeing Olivia. Olivia is later seen traumatized by Bobby's sacrifice. With a ghost Bobby appearing, he encouraged Mario to help Olivia, Olivia was able to move forward and continue their journey. 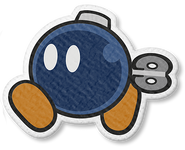