This article is about the normal Koopa Troopa shell. For the Mario Kart item, see Blue Spiny Shell.

Like other Koopa Troopa shells, the Blue Shell can be launched when the Koopa Troopa wearing it is jumped on. It can also be held and thrown.

Blue shells first appear in Super Mario World, where they are usually found after jumping on a blue Koopa Troopa, although standalone ones exist as well. When a Yoshi eats one, he will grow wings and be able to fly for a limited time, at the end of which the Yoshi will swallow it. A Blue Yoshi can use this ability from any shell color.

Kooper from Paper Mario utilized a blue Koopa shell, which was initially stolen by Fuzzies before being retrieved by Mario. Although the next playable Koopa Troopa character, Koops in Paper Mario: The Thousand-Year Door, doesn't possess a blue shell himself, his father Koopley does, as did Kolorado's father. The Blue Koopa shell is capable of resisting stomach acids from within a dragon's stomach tract for a long time, as evidenced by Koopley surviving being eaten by Hooktail by staying in his shell.

In Super Mario Strikers, as well as in Mario Strikers Charged, Blue Shells appear as items. They are usually collected in a pack of three. When used, they will be fired at the opposing players, however, they do not home in, like the Red Shell does. If the Blue Shell happens to hit a player, they will instantly freeze in one spot. This will render them unable to move, and, thus, unable to get the ball. The effects wear off after a few seconds. Unfortunately, these shells can freeze both the user's teammates, or the user. If the shells fail to hit anyone, they will continue bouncing around the stage until they either hit a player, or just wear out on their own. A more effective version of this item is the Giant Blue Shell.

In New Super Mario Bros., there is a Blue Shell power-up. The shell turns Mario or Luigi into Shell Mario or Shell Luigi respectively (when collecting it or ground pounding the Koopa Troopa). The item can be collected via Hammer Bro, Flying ? Block, Mushroom House, Roulette Block, or the Blue Koopa Troopa found only in one level of the multiplayer mode. When ducking, Shell Mario/Luigi is invulnerable to almost anything. Also, they can Shell Dash, allowing them to complete tasks (such as breaking blocks in particular locations) that would normally require a thrown Koopa Shell to achieve. Some obstacles can also only be passed by using the Shell Dash.

The Blue Shell appears in Mario & Luigi: Bowser's Inside Story, as an item found in the overworld and once in the Energy Hold in Bowser's Body. Mario can go in Blue Shells (and turn into Shell Mario from New Super Mario Bros.) by striking Blue Shell blocks. Luigi can then hit Mario using his hammer, and this will make Mario go into the shell, spinning straight forward. This can be used to hit blocks in areas that Mario and Luigi can't directly go into. To toss the Blue Shell, Mario must jump. It behaves similarly to Kooper and Koops's abilities in the Paper Mario series. 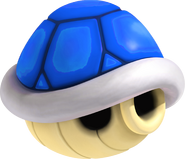 Retrieved from "https://mario.fandom.com/wiki/Blue_Shell?oldid=278318"
Community content is available under CC-BY-SA unless otherwise noted.