Eggs, Fireballs or both
Birdos are a species of dinosaur-like creatures with noses the shape of a cannon that shoot eggs when they are startled or upset. They first appeared in Super Mario Bros. 2 and have made many appearances since then. Birdos have also appeared in many Mario Sports series games. They appear in the audience, and on various teams. There are several named Birdos throughout the series. The most notable Birdo is Birdo, and she is named after her own species, similar to Yoshi.

Birdos made their debut appearance being a minion of Wart. This also includes the appearance of the pink Birdo, later to be known by Birdo. There are also red, green and grey Birdos. They are the bosses of the first two levels of six different worlds. In Super Mario Advance, a robotic version of Birdo called Robirdo replaces Mouser as the boss of World 3.

Birdos make several appearances throughout six different episodes on the show. These Birdos are part of the "Koopa Pack". In one of the episodes a Birdo must rescue her baby. Another episode there is a Birdo with giant wings that his hired by Bowser. The full list of episodes can be found here.

Many different colored Birdos appear in the backgrounds and in cutscenes. The Red Birdo is most notable, as she appears when Bowser wins a trophy.

Birdos participate the most when it comes to soccer. Different teams of Birdos can be chosen by team captains to help win. These members of the Birdos are very aggressive, scoring hard hits and playing rough. There are also a large groups of Birdo spectators in the crowds.

Birdos role are much more prominent and bigger in this game. They are side-kicks on your soccer team, and they all have different uniforms and colors, depending on who your team captain is. Birdos, once again, fill up the crowds. There are nine different color sets of Birdos which are red, orange, a duller orange, yellow, a duller yellow, green, blue, purple and pink. 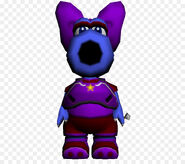 A blue Birdo from Mario Strikers Charged.
Add a photo to this gallery
Retrieved from "https://mario.fandom.com/wiki/Birdo_(species)?oldid=277991"
Community content is available under CC-BY-SA unless otherwise noted.